A new episode in the life of our Lady. "And so, it was in Cana of Galilee that Jesus performed the first of the signs by which he manifested his glory, and his disciples believed in him" (Jn 2:11).

After spending many years in Nazareth, our Lord sets out to preach the coming of the Kingdom of God. All the evangelists report the first act in this new stage of Christ's life: his baptism by John the Baptist on the banks of the Jordan. But only St. John the Evangelist mentions our Lady's presence at the beginning of Jesus' public life: On the third day, a wedding feast took place in Cana of Galilee, and the Mother of Jesus was there. Jesus, too, and his disciples were invited to the wedding " (Jn 2:1-2). 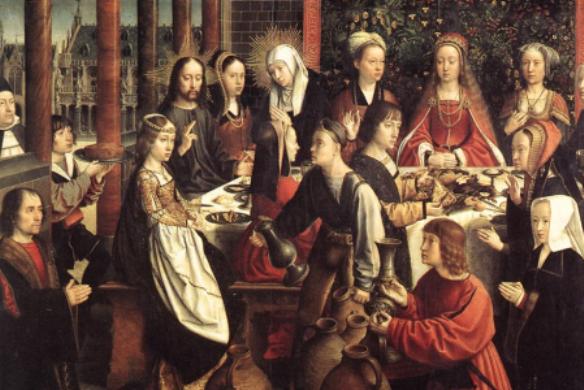 There Jesus, at the request of his Mother, carries out his first miracle. A Jewish wedding feast usually lasted seven days, and in a small town like Cana, it is likely that everyone took part in the celebration, in one way or another. Jesus came accompanied by his first disciples. With so many people attending, it is not surprising that the wine ran short. Ever attentive to the needs of those around her, Mary was the first to realize it and told her Son: They have no wine (Jn 2:3). After his reply (which is not easy to interpret), Jesus complied with his Mother's request and performed a great miracle by converting water into wine.

But what John wishes to tell us does not end there. Writing his Gospel at the end of a long life and under the inspiration of the Holy Spirit, he would have meditated at length on Christ's miracles and teachings. Thus he brings out for us the deepest meaning of this first sign, as recent Popes have pointed out, in agreement with many modern Scripture scholars.

The Evangelist's chronological care in situating this event has a deep significance: According to the book of Exodus, the manifestation of God to Israel when establishing the Covenant took place three days after reaching Mount Sinai. Now, “the third day" since his return to Galilee in the company of his first disciples, Jesus is about to manifest his glory for the first time. Similarly, the full glorification of his Sacred Humanity will take place “on the third day" after his death, through the Resurrection.

Going beyond the historical fact of the wedding, John stresses that Mary's presence at the beginning and at the end of Jesus' public life corresponds to a divine plan. The name our Lord uses to address her in Cana (“woman," rather than “mother") seems to show his intention to form a family founded, not on the bonds of blood, but on faith. This is the same way God addressed Eve in Paradise, when promising that from her progeny would come the Redeemer (Gen 3:15). In Cana, Mary realizes that her maternal mission does not end on the natural plane: God is relying on her to be the spiritual Mother of his Son's disciples. Thanks to her intervention, the disciples' faith in the promised Messiah begins to grow. John himself states this at the end of his account: And so, it was in Cana of Galilee that Jesus performed the first of the signs by which he manifested his glory, and his disciples believed in him (Jn 2:11).

In Cana, Mary realizes that her maternal mission does not end on the natural plane: God is relying on her to be the spiritual Mother of his Son's disciples.

Most scholars say that this wedding feast is symbolic of the Word's union with mankind. As the prophets had announced: I will seal with you an eternal alliance … Nations that do not know you will run to you (Is 55:3, 5). The Fathers of the Church see in the water contained in the stone jars, prepared for the Jewish purifications (Jn 2:6), a symbol of the Old Law which Jesus is bringing to perfection through the New Law of the Spirit imprinted on hearts.

In the Old Testament, a New Covenant is promised for the messianic times, often with the image of a wedding feast, which will abound with every kind of good, especially wine. It is significant that, in John's account, wine is the main protagonist. It is mentioned five times, with the clear statement that the wine Jesus brings about by his power is better than the one that was beginning to run out (Jn 2:10). The quantity of water changed into wine (more than 130 gallons) is also remarkable. Such superabundance is typical of the messianic times.

Woman, what is that to you and to me? My hour has not yet come (Jn 2:4). Whatever the exact meaning of these words (which would have also been reflected in his tone of voice, the expression on his face, etc.), our Lady continues to trust her Son. Mary leaves the matter in his hands and directs the servants to do whatever he tells you (Jn 2:5)—her last recorded words in the Gospels.

That brief phrase recalls what the people of Israel told Moses when, on the Lord's behalf, he asked their consent to the Sinai Covenant: We will do all that the Lord has spoken (Ex 19:8). Those men and women were to be repeatedly unfaithful to the covenant with God. In contrast, the servants in Cana obeyed promptly and completely: Jesus said to them: 'Fill the jars with water.' And they filled them to the brim. Then he told them: 'Take them out now and bring them to the steward.' And they did (Jn 2:7-8).

Mary's trust inaugurates her Son's messianic mission. She precedes the disciples in faith, who come to believe in Jesus after the miracle occurs. Thus our Lady assists her Son in the first moment of the formation of Christ's new family. The Evangelist seems to suggest this when he brings his account to a close: After this he went down to Capharnaum with his Mother, his brethren, and his disciples, and they stayed there for some days (Jn 2:12). Everything is now ready for our Lord, by announcing the Good News through his words and deeds, to begin forming the new People of God, his Church.