Life of Mary (I): The Immaculate Conception

December 8th is the Feast of the Immaculate Conception. The first chapter in the 20-part "Life of Mary" available on the web page explains the meaning of this feast. 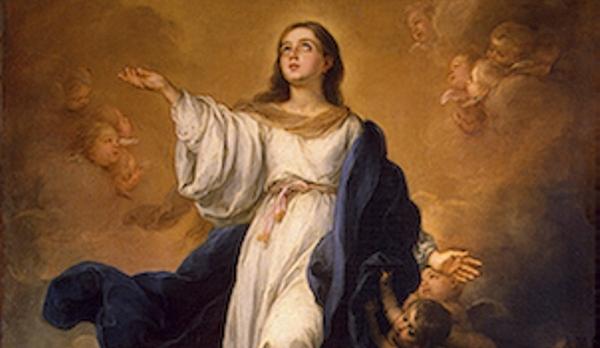 The history of mankind is the history of God's mercy. From all eternity, he chose us in him before the foundation of the world, that we should be holy and blameless before him (Eph 1:4). Nevertheless, through the prompting of the devil, Adam and Eve rebelled against the divine plan: you will be like God, knowing good and evil (Gen 3:5), the father of lies insinuated to them. And our first parents accepted his words. They didn't want to owe anything to God's love. They tried to attain, by their own strength alone, the happiness to which they had been called.

But God didn't turn his back on mankind. From all eternity, in his infinite Wisdom and Love, foreseeing how we would misuse our freedom, he had decided to become one of us through the Incarnation of the Word, the second Person of the Blessed Trinity. Therefore he decreed to Satan, who under the disguise of the serpent had tempted Adam and Eve: I will put enmity between you and the woman, and between your seed and her seed (Gen 3:15). We see here the first announcement of the Redemption, in which we already glimpse the figure of a Woman, Eve's descendent, who will be the Mother of the Redeemer and, with Him and under Him, will crush the head of the infernal serpent. A light of hope is enkindled for mankind in the very moment when we fell.

"We see here the first announcement of the Redemption, in which we already glimpse the figure of a Woman, Eve's descendent, who will be the Mother of the Redeemer and, with Him and under Him, will crush the head of the infernal serpent."

Thus there began to be fulfilled the inspired words—written many years before our Lady came into the world—that the liturgy places on the lips of Mary of Nazareth: The Lord created me at the beginning of his work, the first of his acts of old…before the beginning of the earth. When there were no depths I was brought forth, when there were no springs abounding with water. Before the mountains had been shaped, before the hills, I was brought forth; before he had made the earth with its fields, or the first of the dust of the world (Prov 8:22-26).

The Redemption of the world began to be accomplished right from the beginning of mankind. Little by little, inspired by the Holy Spirit, the prophets unveiled the features of this daughter of Adam whom God—in anticipation of the merits of Christ, the universal Redeemer of mankind—would preserve from original sin and all personal sin, and fill with grace to make her the worthy Mother of the incarnate Word. The virgin shall conceive, and bear a son, and his name shall be called Emmanuel ( Is 7:14). Mary is also foreshadowed in Judith, the heroine of the Jewish people who attained victory against a fearsome enemy, winning these words of praise: You are the exaltation of Jerusalem, you are the great glory of Israel, you are the great pride of our nation…May the Almighty Lord bless you for ever! (Jud 15:9-10).

Carried away by Mary's beauty, Christians have always addressed her with every possible praise, which the Church repeats in her liturgy: garden enclosed, lily among thorns, sealed fountain, gate of heaven, tower of victory over the infernal dragon, paradise of God's delights, guiding star for the shipwrecked, Mother Most Pure ….