In his 17 February 2010 general audience, Pope Benedict XVI spoke about the meaning of Lent in Christian life. 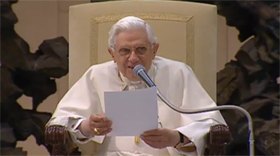 In the general audience on Ash Wednesday, recalling the words “Convert and Believe in the Gospel”, Pope Benedict XVI said that conversion means following Christ, going against the current when the current is a superficial way of life.

The imposition of ashes is an invitation to spend the time during Lent as a more aware and more intense immersion in the paschal mystery of Christ, in his death and resurrection, through participation in the Eucharist and a life of charity.

LENT: PATH OF CONVERSION AND OPENNESS TO DIVINE LOVE

VATICAN CITY, 17 FEB 2010 (VIS) - “Today, Ash Wednesday, we begin the Lenten path that lasts forty days and which leads us to the joy of the Lord’s Easter”, the Pope said at the beginning of his catechesis during today’s general audience, celebrated in the Paul VI Audience Hall.

Recalling the formula, “Convert and Believe in the Gospel”, the Holy Father affirmed that “conversion means changing the direction of the path of our lives. (...) It is going against the current when the “current” is a superficial, incoherent, and illusory way of life that often drags us down, making us slaves of evil or prisoners of moral mediocrity. Nevertheless, through conversion we tend to the highest measure of Christian life, we trust in the living and personal Gospel who is Jesus Christ. He is the final goal and the profound path of conversion, the path that we are all called to travel in our lives, allowing ourselves to be illuminated with his light and sustained by his strength, which moves our steps”.

“‘Convert and believe in the Gospel’ is not just the beginning of the Christian life, but the accompaniment of all our steps, renewing and penetrating all aspects of our lives. Each day is a moment of favour and grace, (...) even when there is no lack of difficulties, weariness, and missteps, when we are tempted to abandon the path that follows Christ and retreat into ourselves and our selfishness without paying attention to the need to keep ourselves open to the love of God in Christ in order to live the very logic of justice and love”.

Benedict XVI emphasized that “faced with the innate fear of our end, and most of all in the context of a culture that tends in many ways to censure reality and the human experience of death, the Lenten liturgy reminds us of, on the one hand, death, inviting us to reality and wisdom, but on the other hand encourages us especially to grasp and live the unexpected newness that the Christian faith reveals in the reality of death itself”.

“The human being”, he continued, “is dust and to dust it will return, but it is dust that is precious in God’s eyes because He created humanity, destining us to immortality. (...) Jesus the Lord also wanted to freely share in human frailty with each person, above all through his death on the cross. But it was precisely this death, full of his love for the Father and for humanity, that was the way of glorious resurrection, the means by which Christ became the source of grace given to all who believe in Him and participate in the same divine life”.

The Pope highlighted that the distribution of ashes “is an invitation to spend the time during Lent as a more aware and more intense immersion in the paschal mystery of Christ, in his death and resurrection, through participation in the Eucharist and a life of charity that is born of the Eucharist and which finds its fulfilment in it. “With the distribution of ashes”, he concluded, “we renew our commitment to follow Jesus, letting ourselves be transformed by his paschal mystery so that we may conquer evil and do good, so that we can let our ‘old selves’, tied to sin, die and let the ‘new person’ be born, transformed by the grace of God”.