Mariano Fazio, Vicar General of Opus Dei, talks about his friendship with Pope Francis and the Prelature’s relationship with the Holy Father.​ 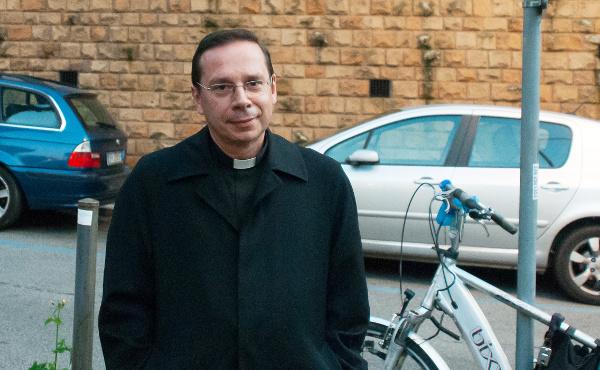 From an interview published by Infovaticana:

Last December, at the age of 55, you were named Vicar General of Opus Dei. Your friendship with Pope Francis is well known. How does the Pope view the Work?

Pope Francis is the first Pope who has dealt closely with Opus Dei as diocesan bishop. When Cardinal Ratzinger was archbishop in Munich, Opus Dei was just beginning its activities in that city.

Cardinal Bergoglio was well acquainted with the Work's apostolic endeavors in Buenos Aires, and took a special interest in several social projects, including schools for children from poor areas.

When I was vicar of Opus Dei in Argentina, the Cardinal at one point asked us to take over a school run by religious nuns in one of the neighborhoods in Buenos Aires known as “villas miserias,” slum districts, since the nuns there no longer had the resources needed to take care of it. In the first handwritten letter he sent to me as Pope, he asked me to convey his greetings to the girls at this school, called Good Counsel, which the Work is now looking after and which currently has 900 girls studying there.

As archbishop, he sent me special thanks for the help we were offering by providing spiritual direction for his diocesan priests. He is well acquainted with the life of Saint Josemaria, and has made it known that he has personal devotion to him. He also has a special affection for a number of people in Opus Dei, including a supernumerary with quite limited material resources who lives in what we Argentines call a “conventillo” [a small sublet room where poor immigrants lived in the early 20th century], and also several people in the Work who are financially well off. Therefore he has quite a comprehensive grasp of the real situation of the Prelature.

What about those who accuse Opus Dei of not liking this Pope?

They are mistaken, and no one will succeed in separating us even a millimeter from the person of the Pope. Any good Catholic needs to be in harmony with each Pope who is governing the Church. This is something that Saint Josemaria left us as an inheritance. Throughout Opus Dei’s entire life, we have always sought out this harmony, from Pius XI up to Francis.

The Prelate, in his monthly letters, constantly echoes Pope Francis’ teachings, and urges us to put them into practice. For example, following the Pope’s request, the Prelate has asked that all the schools, social service projects and parishes entrusted to Opus Dei find ways to put into practice Pope Francis’ call to welcome immigrants: by specific deeds, by collecting funds, by material and spiritual services.

The Prelate has also begun a number of initiatives to take advantage of the Year of Mercy convoked by Pope Francis for all the world’s Catholics. Many of the topics the Pope stresses remind us of Saint Josemaria’s teachings. For example, the emphasis Pope Francis is giving to the sacrament of Penance; he is the Pope who has spoken the most about Confession in recent years….

Is it true the Pope told you that the priests of Opus Dei are the ones who are doing the most to further the holiness of the priests in the Curia?

The Pope thanked me for the fact that Opus Dei organizes monthly days of recollection for those working in the Curia who want to take advantage of them, since he sees how important it is that the people in the Curia have a strong prayer life.

What is your personal reaction to the recent scandals in the Vatican, which some are calling “Vatileaks 2,” and the fact that Opus Dei has been mentioned in this context?

This has been a very painful event, especially because of the possible harm done to the Pope and the Holy See. And it has been a time of special prayer for the Holy Father, and for the reform of the Vatican structures that he is endeavoring to carry out with the help of so many good co-workers. I would like to add here that personally I view these reforms as very necessary in order to live the Gospel spirit in administering material goods. And of course, these reforms start with the personal conversion of each one of us.

Along with this, there is a more subjective pain: that of a brother who sees another brother priest in this surprising situation. While very aware of the gravity of the deeds, and awaiting the outcome of the trial, I have tried to react as I think a good brother should: praying for him and doing what I can, on my part, to try to ensure he doesn’t feel abandoned.

Link to entire interview (in Spanish)

Link to review of "Pope Francis: Keys to His Thought" by Mariano Fazio