Our Lady's joyful encounter with her Son after his Resurrection, seen through texts from the Magisterium, saints and poets.

The Gospels mention various appearances of the risen Christ, but not a meeting between Jesus and his Mother. This silence must not lead to the conclusion that after the Resurrection Christ did not appear to Mary; rather it invites us to seek the reasons why the Evangelists made such a choice.

On the supposition of an "omission", this silence could be attributed to the fact that what is necessary for our saving knowledge was entrusted to the word of those "chosen by God as witnesses" (Acts 10:41), that is, the Apostles, who gave their testimony of the Lord Jesus' Resurrection "with great power" (cf. Acts 4:33). Before appearing to them, the Risen One had appeared to several faithful women because of their ecclesial function: "Go and tell my brethren to go to Galilee, and there they will see me" (Mt 28: 10).

If the authors of the New Testament do not speak of the Mother's encounter with her risen Son, this can perhaps be attributed to the fact that such a witness would have been considered too biased by those who denied the Lord's Resurrection, and therefore not worthy of belief.

Furthermore, the Gospels report a small number of appearances by the risen Jesus and certainly not a complete summary of all that happened during the 40 days after Easter. St Paid recalls that he appeared "to more than 500 brethren at one time" (1 Cor 15:6). How do we explain the fact that an exceptional event known to so many is not mentioned by the Evangelists? It is an obvious sign that other appearances of the Risen One were not recorded, although they were among the well-known events that occurred.

How could the Blessed Virgin, present in the first community of disciples (cf. Acts 1: 14), be excluded from those who met her divine Son after he had risen from the dead?

Indeed, it is legitimate to think that the Mother was probably the first person to whom the risen Jesus appeared. Could not Mary's absence from the group of women who went to the tomb at dawn (cf. Mk 16: 1; Mt 28: 1) indicate that she had already met Jesus? This inference would also be confirmed by the fact that the first witnesses of the Resurrection, by Jesus' will, were the women who had remained faithful at the foot of the Cross and therefore were more steadfast in faith.

Indeed, the Risen One entrusts to one of them, Mary Magdalene, the message to be passed on to the Apostles (cf. Jn 20:17-18).Perhaps this fact too allows us to think that Jesus showed himself first to his Mother, who had been the most faithful and had kept her faith intact when put to the test.

Lastly, the unique and special character of the Blessed Virgin's presence at Calvary and her perfect union with the Son in his suffering on the Cross seem to postulate a very particular sharing on her part in the mystery of the Resurrection.

A fifth-century author, Sedulius, maintains that in the splendour of his risen life Christ first showed himself to his mother. In fact, she, who at the Annunciation was the way he entered the world, was called to spread the marvellous news of the Resurrection in order to become the herald of his glorious coming. Thus bathed in the glory of the Risen One, she anticipates the Church's splendour (cf. Sedulius, Paschale carmen,5, 357-364, CSEL 10,140f).

It seems reasonable to think that Mary, as the image and model of the Church which waits for the Risen One and meets him in the group of disciples during his Easter appearances, had had a personal contact with her risen Son, so that she too could delight in the fullness of paschal joy.

Present at Calvary on Good Friday (cf. Jn 19:25) and in the Upper Room on Pentecost (cf. Acts 1:14), the Blessed Virgin too was probably a privileged witness of Christ's Resurrection, completing in this way her participation in all the essential moments of the paschal mystery. Welcoming the risen Jesus, Mary is also a sign and an anticipation of humanity, which hopes to achieve its fulfilment through the resurrection of the dead. 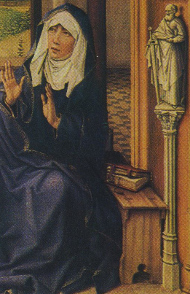 And then about the same time, that is to say, early in the morning, Mary Magdalene, Mary Jacobi and Salome, taking their leave first of our Lady, made their way toward the grave with precious ointments. Dwelling still at home our Lady was at prayer …. And so praying, sweet tears shedding, lo suddenly our Lord Jesus came and appeared to her, and in all white clothes, with a glad and lovely cheer, greeted her in these words “Hail, Holy Mother." And she turned and said: “Art Thou Jesus, my blessed Son?" And kneeling down she honored Him; and He also kneeling beside her said: “My dear Mother, I am. I have risen, and lo, I am with you." And then both rising up kissed the other; and she with unspeakable joy clasped Him, sadly, resting upon Him, and He gladly bore her up and sustained her.

from Pseudo-Bonaventure, "Mirror of the Blessed Life of Jesus Christ" (13th c.)

When the Sabbath was over, Mary Magdalen and Mary, the mother of James, and Salome bought spices with which to go and anoint the dead body of Jesus. Very early on the following day, just as the sun is rising, they come to the tomb (Mk 16:1-2). And on entering they are dismayed, for they cannot find the body of our Lord. A youth, clothed in white, says to them: Do not be afraid. I know you seek Jesus of Nazareth: non est hic, surrexit enim sicut dixit. He is not here, for he has risen, as he said (Mt 28:5).

He has risen! Jesus has risen: he is not in the tomb. Life has overcome death.

He appeared to his most holy Mother. He appeared to Mary of Magdala, who is carried away by love. And to Peter and the rest of the Apostles. And to you and me, who are his disciples and more in love than Mary Magdalen: the things we say to Him!

May we never die through sin; may our spiritual resurrection be eternal. And before the decade is over, you have kissed the wounds in his feet. And I, more daring—because I am more a child—have placed my lips upon his open side.

She knelt, expectant, through the night:
For He had promised. In her face
The pure soul beaming, full of grace,
But sorrow-tranced—a frozen light.

But, ere her eastward lattice caught
The glimmer of the breaking day,
No more in that sweet garden lay
The buried picture of her thought.

The sealed stone shut a void, and lo!
The Mother and the Son had met!
For her a day should never set
Had burst upon the night of woe.

In sudden glory stood He there,
And gently raised her to His breast:
And on His heart, in perfect rest,
She poured her own—a voiceless prayer.

Enough for her that He has died,
And lives, to die again no more:
The foe despoiled, the combat o'er,
The Victor crowned and glorified.

What song of seraphim shall tell
My joy today, my blissful queen?
Yet truly not in vain, I ween,
Our earthly alleluias swell.

But thou, sweet Mother, grant us more
Than here to join the festive strain:
To hymn, but never know, our gain
Were ten times loss for once before.

Thy faithful children let us be.
Entreat thy Son, that he may give
The wisdom to our hearts to live
In his, the risen life, with thee.

For so, amid the onward years,
This feat shall bring us strength renewed;
To pass secure, o'er self subdued,
To Easter in the sinless spheres.

Poem published anonymously in "The Catholic World" in 1869