Letters (I): New Volume in the Complete Works

A new volume in the Complete Works of Saint Josemaria has just been published in Spanish: four extensive letters addressed to the faithful of Opus Dei. An interview with the editor, Luis Cano, researcher at the Saint Josemaría Escriva Historical Institute. 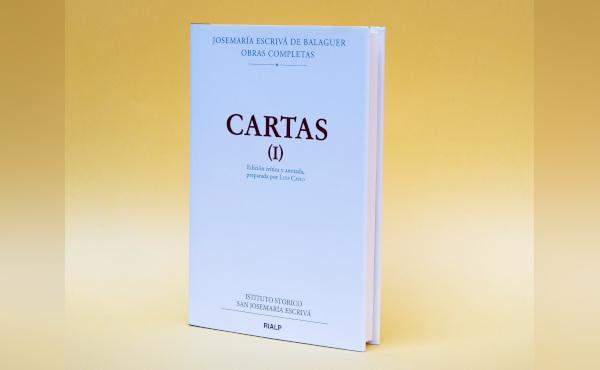 This volume of letters written by Saint Josemaría to the faithful of Opus Dei is the first in a series that is now being published. What sort of letters are they?

They are written to people of Opus Dei of all times, not to specific recipients. They deal with topics related to the spirit and history of Opus Dei. But the great majority are of interest for all Christians, since they speak above all about following Christ, the only topic that truly interested Saint Josemaría. He wanted to share with others his rich human and supernatural experience, the fruit of an entire life of prayer and reflection. A central concern is the contribution that lay people and secular priests can make in our world, to better it from within and announce Christ to all men and women, in every sector of society. These letters are striking for their depth and relevance for the modern world. At the same time, their tone is that of a family get-together. They are neither treatises, nor homilies, nor meditations. When reading them, it is easy to imagine the founder of Opus Dei having an intimate talk with his spiritual sons and daughters.

Why are they being published now? Didn’t people know about them before?

With the creation of the Saint Josemaría Escriva Historical Institute in 2001, the publication of the complete works of the founder of Opus Dei was begun, using a critical methodology, that is, a careful study of the sources. This work has required considerable time and effort, and eight volumes of this collection have already been published. Once the first phase involving the works published during his lifetime was finished, we began editing the unpublished writings. In 2017 the first volume of this new series was published, with texts from his preaching. The next step has involved editing a large group of unpublished writings, the Letters, on which several members of the Institute have been working for years now. We are very excited about this project because of the great value they have in our opinion. In any case, many fragments of these Letters were already well known, since they have been used partially in various publications for decades.

Could you introduce the main themes of the four letters that are now being published?

The first deals with the sanctification of ordinary life and work in the middle of the world, where Christians act as leaven in the dough, trying to bring all men and women closer to Christ. In other words, this first text, relatively brief, deals with the nucleus of Opus Dei’s message. The second letter focuses on humility, as an indispensable virtue for Christian life and for being faithful to God. The third addresses the topic of service to God, to the Church and to all men and women, which Christians are called to carry out in the middle of the world. I found especially interesting and timely some passages in which he speaks about the role of the lay faithful in improving and vivifying with a Christian spirit the political, social and cultural environment in the place where they live and work. The topic of freedom and respect for the opinions of others is also very present. Finally the fourth letter, which is fairly short, offers some guidelines for announcing Christ’s message in a strongly secularized world. The central concern is the need to practise charity in transmitting the faith. It contains a strong call for evangelizing our world with a friendly and optimistic spirit, which I think will be a source of encouragement for many Christians committed to evangelization, whether they know much about Opus Dei or not.

How many letters are there, and what was the time frame for their writing? Is there a plan for publishing all of them?

There are 38 letters, if we include only those that Saint Josemaría considered to be a cycle, that is, a fairly homogeneous set of writings. In reality, there are some more, which we still don’t know whether to include in this series of the Collection of Complete Works or in others dedicated to pastoral writings. In all, one could speak of 40-45 documents with very similar characteristics. The plan is to publish them over the next few years.

In addition to these letters, addressed to the faithful of Opus Dei in general, will the correspondence with specific people also be published?

Yes, we are planning to publish a complete series of these letters, some of which have already appeared in the journal Studia et Documenta. There are several thousand of these letters, so we are studying when and how to begin their systematic publication.

What was the historical and ecclesial context in which these letters were written?

It isn’t easy to answer this, since we don’t know how long their writing process took. In fact, Saint Josemaría worked on some letters over a period of almost 40 years; he began to outline them as early as the 1930s, writing down ideas on index cards that he later hoped to develop more extensively. But he didn’t do so until many years later. He worked thoroughly on the whole cycle of the Letters, in their final writing phase, over a period from the late 1950s to the early 1970s. In other words, during those years he completely reworked the old texts he had kept, adding more modern quotations and employing more recent expressions and formulations of his thought, taken from the transcriptions of his own words in meditations and talks, and adding new parts in his own handwriting. It is easy to notice that he naturally used the language and ideas that he had in his head at the time of that reworking, although in several documents he wanted to leave a past date, as a remembrance – often enriched with a symbolic value – of the beginning of that writing process. Hence the difference between these letters and those addressed to a specific person, which will be published in a separate collection, as we said above, and which bear the date of the time they were written. All this is explained in detail in the introduction to this first volume. I think that Saint Josemaría was interested in giving in these Letters a finished vision of the spirit of Opus Dei, one that would have perennial validity, before our Lord called him to the next life.

Since these letters are addressed to the faithful of the Work, what approach did the Historical Institute take in editing this collection?

The first job has been to carefully examine the sources and previous material that we have, since Saint Josemaría revised these texts several times and produced different versions, some of which he destroyed, while others he kept. A critical work was needed to collate and determine the version that he wanted to leave as definitive. On the other hand, this is an annotated edition, although we tried to limit the number of notes to what is essential, so as not to distract the reader from the main text. This first volume also includes an introduction, which explains the history of how these documents were written and their main characteristics, with an overview of the rich heritage that is offered here.