Commentary on the Gospel: "I thirst"

An excerpt from the Gospel for Good Friday and commentary. 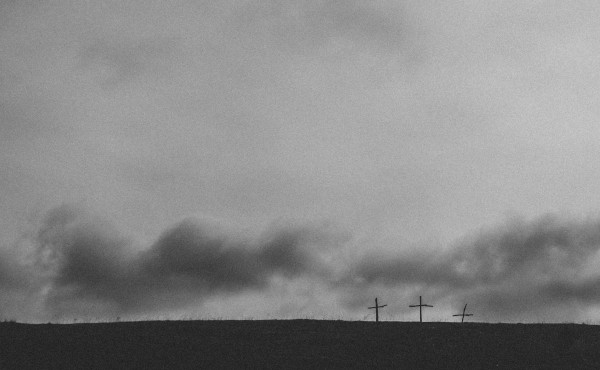 So they took Jesus, and he went out, bearing his own cross, to the place called the place of a skull, which is called in Hebrew Golgotha. There they crucified him, and with him two others, one on either side, and Jesus between them. Pilate also wrote a title and put it on the cross; it read, “Jesus of Nazareth, the King of the Jews.” Many of the Jews read this title, for the place where Jesus was crucified was near the city; and it was written in Hebrew, in Latin, and in Greek. The chief priests of the Jews then said to Pilate,

When the soldiers had crucified Jesus they took his garments and made four parts, one for each soldier; also his tunic. But the tunic was without seam, woven from top to bottom; so they said to one another,

“Let us not tear it, but cast lots for it to see whose it shall be.” This was to fulfil the scripture,

“They parted my garments among them, and for my clothing they cast lots.”

So the soldiers did this. But standing by the cross of Jesus were his mother, and his mother’s sister, Mary the wife of Clopas, and Mary Madalene. When Jesus saw his mother, and the disciple whom he loved standing near, he said to his mother,

“Woman, behold, your son!” Then he said to the disciple, “Behold, your mother!”

And from that hour the disciple took her to his own home.

After this Jesus, knowing that all was now finished, said (to fulfil the scripture),

A bowl full of vinegar stood there; so they put a sponge full of the vinegar on hyssop and held it to his mouth. When Jesus had received the vinegar, he said,

“It is finished”; and he bowed his head and gave up his spirit.

On Good Friday, the Church right from the first centuries doesn’t celebrate the Eucharist but rather the Passion of Jesus. The liturgy encourages us to foster in our hearts a contrition imbued with hope and thanksgiving, not sadness and bitterness. Therefore the Church dares to say: “Faithful Cross the Saints rely on, Noble tree beyond compare! Never was there such a scion, Never leaf or flower so rare. Sweet the timber, sweet the iron, Sweet the burden that they bear!” And today we adore the Cross by genuflecting, “because of the wood of a tree, joy has come to the whole world.”[1] The Passion narrative read today is that of Saint John, the beloved disciple who was a protagonist in these events. We can focus here on some details of the culminating moments at the foot of the Cross.

The evangelist tells us that after dividing up the garments of Jesus, the soldiers cast lots for his tunic without seam, thus fulfilling to the letter a verse from Scripture (cf. Ps 22:18). Some Fathers of the Church have seen here a symbol of the Church. Saint Augustine said: “This division of the garments of our Lord Jesus Christ into four parts signifies the Church spread throughout the four corners of the world. But the tunic is a symbol of the unity of the four parts, through the bond of charity.”[2]

The narrative focuses especially on the Mother of Jesus. “Mary shows herself worthy of the dignity that corresponds to the Mother of Christ,” Saint Ambrose writes, highlighting our Lady’s immense faith. For “when the Apostles fled, she stood at the foot of the Cross, and saw in her Son’s wounds not the death of her treasure but the salvation of the world.”[3] And at that sublime moment, the Word of God through whom everything was created (cf. Jn 1:1-3), makes Mary the mother of all mankind: “Behold, your mother!”

Then, just before dying, Jesus says: “I thirst.” This was not simply a pressing physical need because of the loss of blood. “Jesus thirsts; his asking arises from the depths of God’s desire for us,” the Catechism teaches.[4] In a certain sense it falls to us to quench God’s thirst. Pope Francis said: “In your thirst, Lord, we see the thirst of your merciful Father who wanted through you to embrace, forgive and save all of humanity … Let the feelings of faith, hope, charity and sorrow for our sins be ingrained in our hearts, Lord, and lead us to repent for our sins that have crucified you. Lead us to transform our conversion made of words into a conversion of life and deeds.”[5]

Finally Jesus says: “‘It is finished’; and he bowed his head and gave up his spirit.” The narrative shows us in stark terms how our Lord loved us “to the end” (Jn 13:1), without holding back anything. And “love is repaid with love,” Saint Josemaria said, making use of a well-known Spanish refrain.[6] We shouldn’t be afraid to show Jesus our affection and tenderness. Saint Josemaria, putting himself into this scene alongside Nicodemus and Joseph of Arimathea as another person there, can be a guide for us: “With them I too will go up to the foot of the Cross; I will press my arms tightly round the cold Body, the corpse of Christ, with the fire of my love... I will unnail it, with my reparation and mortifications... I will wrap it in the new winding-sheet of my clean life, and I will bury it in the living rock of my breast, where no one can tear it away from me, and there, Lord, take your rest! Were the whole world to abandon you and to scorn you... serviam! I will serve you, Lord.”[7]

[1] Roman Missal, Friday of the Passion of the Lord, Hymn.

[6] Saint Josemaria, The Way of the Cross, Fifth Station, Points for meditation no. 1.

[7] Saint Josemaria, The Way of the Cross, Fourteenth Station, Points for meditation no. 1.