"If feminism means equal rights, I am extremely feminist" 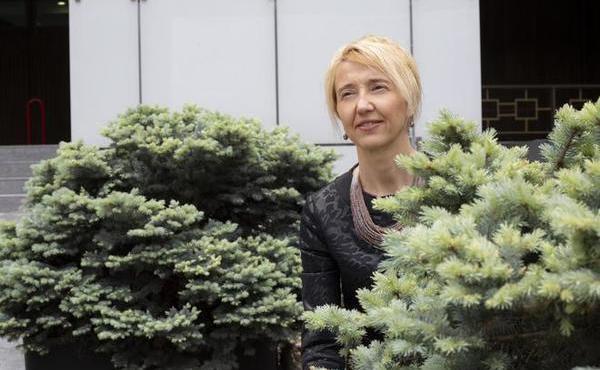 Isabel Sanchez (1969, Murcia, Spain) is a lawyer by training and the woman who holds the highest position a woman can have in the hierarchy of Opus Dei. She is the Secretary of the Central Advisory, a council made up of women who advise the Prelate of Opus Dei.

You have lived in Rome since 1992 and are currently in Madrid to attend the beatification of Guadalupe Ortiz de Landázuri, the first lay woman of Opus Dei to be raised to the altars.[1] Who was she?

Guadalupe is a woman who lived during the 1940s, and who was strong, passionate, audacious and magnanimous. She was ahead of her time, thanks to the openness of her parents above all.

What do you mean by “ahead of her time”?

She was the only girl in her family and her father, a military officer, was transferred to Tétouan, Morocco, where there was only one school at the time: an all-boys school. Guadalupe studied there and had to assert herself. Once, to gain the respect of her classmates, she made a bet to see who was capable of drinking a full ink bottle. She won the bet.

She went on to university and studied chemistry, at a time when few women were pursuing higher education. She experienced a very difficult event in her life: the execution of her father at the beginning of the Spanish Civil War. Later she met Saint Josemaria and soon after asked for admission to Opus Dei. She was the first woman to bring Opus Dei to Mexico where, by the way, she used to travel alone by horseback through dangerous territory and had to carry a knife for self-defense.

What miracle has Guadalupe done to be beatified today?

It was the healing of a basilar carcinoma in the eye of a man from Barcelona. He was cured overnight of this disease, which was quite visible and had been diagnosed definitively by several ophthalmologists. He needed surgery and he was afraid, so he went to pray in a chapel where he found a picture of Guadalupe, to whom he prayed insistently so that he would not have to undergo surgery. He slept peacefully and the next day when he got up, the carcinoma had disappeared. The doctor who examined him could not believe it and certified that it was incomprehensible. The doctors and theologians on the theological commission that reviews possible miracles also agreed that this healing had no explanation.

You believe in miracles: what miracle would you like to see come true?

And when did you experience that in your life?

Ever since I was little, I was aware that there was someone taking care of me and watching over me. I have felt it clearly in different stages of my life, especially when my mother died when I was 9 years old. I have never felt orphaned. I have always felt the presence of God who watches over the world.

You occupy the most important position a woman can occupy in Opus Dei: you are the Secretary of the Central Advisory, an organization made up of about 40 women of different nationalities. What do they do?

The Central Advisory is the council that helps the Prelate in all matters related to women: their formation, well-being... What we bring to the table is drive and creative thinking, because women are so connected to life, to real life, that they are always searching for new solutions. But I'm not sure that my position is the most important: that would be whoever is capable of improving her surroundings the most, and I do not know who she is. It could be an elderly lady who can barely talk anymore or a mother in Africa who provides for her family. But it is true that I have more decision-making power in Opus Dei than they do.

Do you advise the Prelate of Opus Dei only on women's issues or on other issues as well?

It could be any issue although in regard to the men I only make suggestions.

I understand then that the organism that you preside over is a kind of C-9 (the council of 9 cardinals that advises Pope Francis) but made up of women to help the Prelate of Opus Dei.

It is a useful comparison to understand us, but I do not know exactly what the assignments are in the C-9.

What decision has been the hardest for you in this role?

The last time there were armed conflicts in Lebanon, there was a difficult decision to make. We had to decide what the best option was for the people of the Work there. We asked ourselves: "What do we do? Do we tell them to evacuate, or to stay and hold out as long as possible?" In the end, we chose to leave it up to each person there to decide. Some told us that they were afraid and that they wanted to leave, but many — most of them — wanted to stay.

Also, when it is necessary to elect a new Prelate of Opus Dei, the Central Advisory proposes the names of those whom they think are best qualified for that position. Women do not participate in the final vote, but they point out who the candidates should be. We could say that they do a first screening, is that right?

Exactly. They suggest names, and in principle the new Prelate should be elected from among those names. So not only do they suggest, but in a certain way they limit the choice.

In the C-9, the council that advises the Pope, they are all men, nine cardinals... And in the College of Cardinals that elects the Pope there are no women either. Would you like women to be there?

I don’t know if I would like to see a woman in the College of Cardinals. What I would like is to see many women in many places in the Church. Pope Francis places a lot of emphasis on this: he has a great awareness of what women can contribute and a great openness in that sense.

Where should women be in the Church?

Not in the College of Cardinals, but there are many other places where women should shine forth. The first ones that should shine brightly are the Christians on the street, be they men or women. The perspective of women can contribute to many issues and affairs. Women have acquired a great spiritual heritage, and it would be a loss if neither the Church nor society knew how to take advantage of it.

Historically, there have been cardinals who were not priests but laymen. Could this not open the door to women entering the College of Cardinals?

What I think should be done, little by little (but better if it were done quickly), is an evaluation of the functions that really correspond to priests—which tasks are properly theirs and which are not. We must include all the laity, both men and women. No, we cannot maintain the status quo that everything that priests have been entrusted to do—without strictly corresponding to their ministry—will continue being entrusted to men. And what’s more, by the numbers, the Church is more feminine than masculine.

Pope Francis recently sent a message to religious women from all over the world in which he said "service yes, servitude no," and he reminded them that they had not become religious "to dedicate themselves to the domestic service of the clergy." Does this problem also exist in Opus Dei?

A Christian is nobody’s slave, not even God’s who is our Father. Service is a trademark of the baptized Christian, who seeks to be master of him or herself and, at the same time, to always serve others. The call to Opus Dei specifies this service in a daily effort to sow good in and through the profession that one chooses. Among the women of the Work there are professors, lawyers, doctors, engineers, business women, hairdressers, actresses, cooks ... everything! Some freely choose to develop their talents in the care of their home and family, as a personal option to care for the world. There are no “classes” within Opus Dei, much less servitude. There is great respect for each other and happiness and pride in this service.

The task of serving others should also begin to be taken up by men, don’t you think?

Definitely. That is something that, from my point of view, should be promoted. Women have arrived to the public sphere, but arriving is not enough. We have to be able to arrive and transform, enter into public spaces and get men to enter private or family spaces, and empower them in that area. Society must also understand that this private sphere has a fundamental public dimension, and men have a lot to learn and contribute there. We need a fairer, more balanced, more egalitarian society. We need a society more attentive to the vulnerable, because we are soon going to find ourselves with a society full of aging, sick, uprooted people, wounded by many wars and conflicts ... And there are two options regarding the vulnerable: either we discard them or we integrate them and take care of them. I think the latter is something that a woman does better. But she has to have the strength to want to do it and not stay in the logic of domination and power, a logic that is predominant today but that was not introduced by women.

The Pope recently acknowledged the sexual abuse of nuns by bishops and priests. Why have the abuses against women within the Church taken so long to come to light? Why have they been silenced for so long?

It is a complex problem. Not only have abuses of women been silenced, but also abuses of adult men. But sensitivities have changed: before, the victims of those abuses were not so aware of the path they had to take to denounce their abusers, and many of them felt a great respect for authority. Evil can often silence, shackle. It is not easy to discover the evil that someone is suffering, and in this area, even less so. And I think that this is something that has happened to both men and women. But today, thank God, there is much more social awareness and Pope Francis is determined to fight this problem with all his strength, to have zero tolerance. Paths for reporting have been opened up and the whole world has become aware of the problem.

Do you consider yourself a feminist?

If by feminism we understand the principle of equal rights between men and women, equal dignity and the search for equal opportunities, yes I am, I am extremely feminist. Things have to change, obviously, but with the collaboration of men.

Is there another feminism?

There are many types of feminism; the one that I defend aspires to reach high and transform the world, listening to a different logic.

[1] An expression meaning that the person is assigned a feast day in the Church’s liturgical calendar. The date is assigned at the time of beatification.