"In the name of Jesus Christ of Nazareth, walk"

On Wednesday, August 7, Pope Francis resumed his cycle of catechesis on the Acts of the Apostles, focusing on the theme “In the name of Jesus Christ of Nazareth, walk” (Acts 3:6). 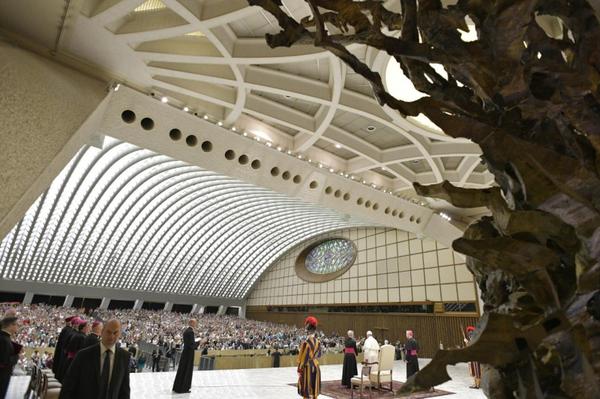 In the Acts of the Apostles, the preaching of the Gospel is not entrusted solely to words, but also to concrete acts that bear witness to the truth of the proclamation. These are “prodigies and signs” (Acts 2: 43), which take place through the work of the Apostles, confirming their word and demonstrating that they act in Christ’s name. It thus happens that the Apostles intercede and Christ “worked with them”, confirming His word by the signs that accompany it (Mk 16: 20). So many signs, so many miracles that the Apostles worked were precisely a manifestation of Jesus’ divinity.

Today we find ourselves before the first account of healing, before a miracle, which is the first account of healing in the Book of the Acts. It has a clear missionary purpose, which seeks to inspire faith. Peter and John go to pray in the Temple, centre of the experience of faith of Israel, to which the first Christians are still strongly linked. The first Christians prayed in the Temple in Jerusalem. Luke notes the time: the ninth hour, that is three o’clock in the afternoon, when the sacrifice was offered as a holocaust as a sign of the communion of the people with their God; and it is also the hour at which Christ died, offering Himself “once for all” (Heb 9: 12; 10: 10). And at the Temple gate called “Beautiful” – the Beautiful gate – they see a beggar, a man paralytic since birth. Why was he at the gate, that man? Because the Mosaic Law (see Lev 21: 18) forbade the offering of sacrifice by those with physical impairments, considered to be the consequence of some fault. Let us remember that, faced with a man blind since birth, the people had asked Jesus: “Who sinned, this man or his parents, that he was born blind?” (Jn 9: 2). According to that mentality, there was always blame at the origin of a malformation. And subsequently he was even denied access to the Temple. The lame man, paradigm of so many people excluded from and rejected by society, is there to beg, as he does every day. When something unexpected happens: Peter and John arrive and this triggers an exchange of looks. The lame man looks at the two to beg, instead the apostles stare at him, inviting him to look at them in a different way, to receive another gift. The lame man looks at them and Peter says, “In the name of Jesus Christ of Nazareth, walk!” (Acts 3: 6). The apostles established a relationship, because this is the way in which God likes to manifest Himself, in relation, always in dialogue, always in apparitions, always with the inspiration of the heart: they are God’s relations with us; through a real encounter with people that can take place only in love.

The Temple, besides being the religious centre, was also a place of economic and financial exchanges: the prophets and even Jesus Himself had protested against this reduction several times (see Lk 19: 45-46). But how often do I think of this when I see a parish where they think money is more important than the sacraments! Please! A poor Church: let us ask the Lord for this. That beggar, meeting the Apostles, does not find money, but finds the Name that saves man: Jesus Christ the Nazarene. Peter invokes the name of Jesus, orders the paralytic to stand up, in the position of the living: standing, and he touches this sick man, that is, he takes him by the hand and he lifts him up, a gesture in which Saint John Chrysostom sees “an image of the resurrection” (Homilies on the Acts of the Apostles, 8). And here there appears the portrait of the Church, who sees those who are in difficulty, who does not close her eyes, who knows how to look humanity in the face to create meaningful relationships, bridges of friendship and solidarity instead of barriers. There appears the face of “a Church without frontiers” (Apostolic Exhortation Evangelii gaudium, 210), who knows how to take one by the hand and to accompany in order to lift up, not to condemn. Jesus always reaches out His hand, always tries to raise up, to act in order to heal people, to make them happy, to let them encounter God. It is the “art of accompaniment”, that is characterized by the delicacy with which it approaches the “sacred ground of the other”, giving the journey a pace that is “steady and reassuring, reflecting our closeness and our compassionate gaze which also heals, liberates and encourages growth in Christian life” (ibid., 169). And this is what the two apostles do with the lame man: they look at him, they say, “Look at us”, they reach out their hand, they make him get up and they heal him. This is what Jesus does with us all. Let us think about this when we are in bad moments, moments of sin, moments of sadness. There is Jesus Who says to us, “Look at me: I am here”. Let us take Jesus’ hand and let ourselves get up.

Peter and John teach us not to trust in means, which are also useful, but in true wealth which is the relationship with the Risen One. Indeed we are, as Saint Paul would say, “poor, yet making many rick; having nothing, and yet possessing everything” (2 Cor 6: 10). Our everything is the Gospel, which manifests the power of the name of Jesus, which performs wonders.

And we – every one of us – what do we possess? What is our wealth, what is our treasure? With what can we make others rich? Let us ask of the Father the gift of a grateful memory in recalling the benefits of His love in our life, to give to all the witness of praise and recognition. Let us not forget: the hand always reaching out to help the other to get up; it is the hand of Jesus that, through our hand, helps others to get up.