Daily posts on Alvaro del Portillo’s life story and pastoral message can now be received through Twitter and Facebook. A smartphone app is also available.

Personal devotion to Venerable Alvaro del Portillo is increasing worldwide. The social media has not been an exception. Since July 5 last year, when the Holy See approved the miracle attributed to his intercession, many are awaiting the announcement of his beatification.

Followers of these parallel sites will receive daily quotations and biographical notes of Bishop Alvaro, as well as personal testimonies from people who knew him. In addition, those who "Like" the Facebook page will receive news updates on his cause for canonization and narrations of favors received through his intercession.

A smartphone app named “Alvaro Daily” is now available for mobile users. It provides the following features: 1. Details about the miracle attributed to Alvaro del Portillo which opened the way for his beatification; 2. Information about Saxum, a Conference Center in Jerusalem inspired by Alvaro del Portillo; 3. Daily quotes from his preaching and writings; 4. A quick access to his Prayer Card for private devotion to ask for his intercession; 5. Writings on the life and teachings of Alvaro del Portillo. 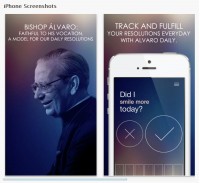 More than 12,000 signed accounts of favors have been received in Rome, attributed to Bishop Alvaro’s intercession, many from countries in which Opus Dei is not yet established. The official Newsletter about his cause for canonization has reached five million copies in print; ten million prayer-cards for private devotion have been distributed world-wide.

During his years as head of Opus Dei (1975 to 1994), Alvaro del Portillo promoted many social and educational projects for the benefit of the less fortunate. A portion of proceeds from the Alvaro Daily app is earmarked for the construction of Saxum, a Retreat House, Conference Center and Multimedia Resource facility for pilgrims to the Holy Land. Another beneficiary is the St. Vincent Ferrer Parochial School, in Iloilo (the Philippines) which was destroyed in November by super-typhoon Haiyan.

The Alvaro Daily smartphone app is available at http://bit.ly/1ewtlw8 .

A new section has also been opened up on the homepage of opusdei.org. Click on BISHOP ALVARO DEL PORTILLO in the left-hand column for information about his life and cause of canonization.

BISHOP ALVARO DEL PORTILLO section with news about his life and cause of canonization.