Some Social and Educational Projects Begun by Blessed Alvaro

During his years as head of Opus Dei, Bishop Alvaro del Portillo fostered the setting up of many social and educational projects all over the world, many of them for the benefit of the very needy.

"All of us, to the extent possible, need to have contact with people who suffer, with the sick, the poor, the lonely, the abandoned.”

These words written by Msgr. Alvaro del Portillo in 1981 reflect his own personal experience. As a 19-yearold university student, he became involved in the activities of the Society of St. Vincent de Paul, and helped distribute gifts and food, taught catechism, and provided care for abandoned children in the poorest areas of Madrid. Encouraged by St. Josemaría, he continued providing this assistance with the help of the students at the DYA Academy, where Opus Dei had recently begun its apostolic activities.

During the years Bishop del Portillo was at the head of Opus Dei (1975– 1994), he took advantage of his pastoral visits throughout the world to encourage the start of many social and educational initiatives. His concern for the poor and sick led him to urge forward and encourage others to take part in projects for the assistance of the needy, seeking to find a professional remedy for these human needs.

A pdf file, "A Helping Hand," contains descriptions and photos of many of these projects, and can be viewed here.

Below is more information about some of these projects, which Bishop del Portillo followed closely and sometimes gave specific suggestions for their effectiveness.

Monkole Medical Center was set up in Kinshasa following a trip by Bishop Alvaro del Portillo to Congo in 1989. During his stay, Don Alvaro suggested that it would be a good idea if some members of Opus Dei started working on a medical center in response to a request made by Cardinal Laurent Monsengwo, then President of the Bishops’ Conference of Congo. Monkole currently offers both medical assistance (in the areas of gynecology and obstetrics, surgery, internal medicine and pediatrics) and hospitalization services, as well as providing classes in basic hygiene and health, particularly concerning prevention of diseases such as HIV/AIDS, sickle cell anemia, malaria and tuberculosis. Three medical clinics connected to the hospital--Eliba, Moluka and Kimbondo--offer medical care in poor neighborhoods. Also affiliated with Monkole are a nursing school (ISSI), which graduates 50 new nurses every year, and a training center for doctors (CEFA). Monkole and its affiliated institutions now have over 50,000 medical consultations each year. (www.monkole.cd) 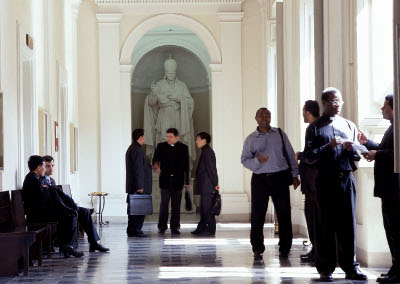 The Pontifical University of the Holy Cross is a university-level center for ecclesiastical studies serving the whole Church. This project had been desired by the founder of Opus Dei and was launched by Bishop Alvaro del Portillo. It currently has four faculties (Philosophy, Theology, Canon Law and Institutional Communications) and a Higher Institute of Religious Sciences. Some 6,000 graduates have now benefitted from its programs. Academic activities started in 1984 under the title of the Roman Academic Center of the Holy Cross, the forerunner of the present university, which was established as a pontifical institution by John Paul II on January 9, 1990. Many bishops from all over the world send priests and seminarians from their dioceses to receive academic instruction and spiritual formation at this university. Following the express wishes of Bishop del Portillo, the academic activities at the Pontifical University of the Holy Cross are open to scholars and students from all fields working on questions concerning scientific, philosophical, economic and social issues, with a view to encouraging an open dialogue between the faith and the world. (www.pusc.it)

A few months after the terrible earthquake that devastated Guatemala in February 1976, the Foundation for Integral Development (FUDI) was set up with the encouragement of Bishop Alvaro del Portillo to take on the job of rebuilding Sajcavillá, a village inhabited mainly by indigenous people in the district of Sacatepéquez. In the early nineties, FUDI promoted the creation of Utz Samaj, a community development project in Tecpan in the district of Chimaltenango, another predominantly indigenous area in the western highlands of Guatemala. The goal of Utz Samaj is to give farm workers technical, business and human training. Its Agricultural Training School turns out graduates with an entrepreneurial mindset who have gone on to set up small farms and businesses based on their expertise in agriculture, greenhouse management, and marketing, inspired by a vigorous work ethic. Over 50,000 families in the area now benefit from the training programs offered by Utz Samaj. Their main source of revenue is farm work. (www.serviciosuniversitarios.org)

Bidasoa International Ecclesiastical College is an international seminary run by the Prelature of Opus Dei. It was erected by the Holy See in 1988 at the request of Bishop Alvaro del Portillo and is located in Pamplona (Spain). The students who attend this seminary are sent by their bishops to be trained for the priesthood to serve in their respective dioceses. In Bidasoa’s first 23 years of operations, it has seen 512 of its seminarians ordained priests, coming from 160 different dioceses in 29 countries. Currently Bidasoa has 93 seminarians, from 46 different dioceses and 16 countries. Their philosophy and theology courses are given by the Faculty of Theology at the University of Navarra. (www.ceibidasoa.org)

Lamatepec opened its doors in 1981. Bishop del Portillo followed its launching and the first years of its life very closely because of the civil war raging in El Salvador at the time. Some words of encouragement from Don Alvaro during a meeting in Rome with one of the couples sitting on Lamatepec’s board of directors helped to keep the promotors of this project going through the tough years when they were trying to get it off the ground: “If you help look after the children of others, God will look after your own children.” Lamatepec currently has 700 students. Twenty-four graduating classes have gone through the school, many of whom now work in social service projects in San Salvador. In addition, the school also runs 15 social programs for people in need. (www.lamatepec.edu.sv)

Pedreira Educational and Professional Center(CEAP) began in 1985 as a result of an ideal shared by a group of professionals and students who wanted to set up a social project in São Paulo that would contribute to social development in a needy area in the city. They decided to start a school in the Pedreira district (located 30 km from the downtown), which had some of the worst social conditions in the city, with high rates of delinquency, violence and drug use among young people. Currently, CEAP serves 580 students each year. In addition, it offers basic courses in vocational education in electricity and computing for students aged 10 to 14, as well as professional training courses in computer networks, business administration and telecommunications for students aged between 15 and 17. The center also offers members of the local community preparatory courses to bring future students up to admission-level requirements for its programs, along with medical care, which benefits approximately 7,000 people per year. Over 6,000 students have graduated from the Center. (www.pedreira.org)

Kinal Technical Training Center was foundedin 1961, but it was only in 1985, due to the special encouragement of Don Alvaro, that it began construction of its new facilities. Kinal gives economically-disadvantaged youth the opportunity to obtain a high school diploma along with high-level technical training, opening up the prospect of a better professional future. It also offers refresher courses and training for adults, mainly in the technical field. 1,200 young people between the ages of 12 and 19 are currently studying in Kinal, plus another 800 adults. Over the past 15 years, the school has on average graduated more than 200 students per year. (www.kinal.org.gt) 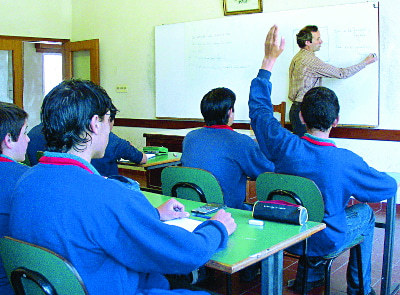 The Children’s City was founded in 1951 by Father Carlos Alvarez Ortiz, who ran it until 1984. Initially it was an orphanage that gave shelter to 50 children, but in 1986 it became a Family Education Development Center. In 1987, Bishop Alvaro del Portillo encouraged a group of faithful of the Prelature to take responsibility for the moral and spiritual formation offered at the institution. Today, the operations of the Children’s City, which has now graduated over 2,600 students, include a boys’ school, a girls’ school, a family education center, a church and the Centennial Medical Clinic. The school presently caters to a total of 905 families through family education courses and has 1,330 students from kindergarten through grade 12. It provides 22,000 monthly breakfasts, devotes 16,500 hours annually to one-on-one tutoring, conducts 7,000 medical consultations every year in the clinic, and promotes four annual cancer-prevention campaigns. (www.ciudadelosninos.edu.mx)

The Seat of Wisdom International Ecclesiastical College is a seminary erected by the Holy See on January 9, 1991 which welcomes candidates for the priesthood from all across the globe. The project was initiated by Bishop del Portillo in response to a request from Blessed John Paul II. Since its inception, more than 400 of its seminarians have been ordained priests. Students are sent by their bishops from all over the world, and once they have completed their ecclesiastical studies they return to their dioceses. Currently the College has 90 seminarians from 31 different countries. Don Alvaro encouraged the governing board to foster an environment of trust and freedom, order and fraternity, along with an atmosphere of serious study and strong piety. (www.sedessapientiae.it) 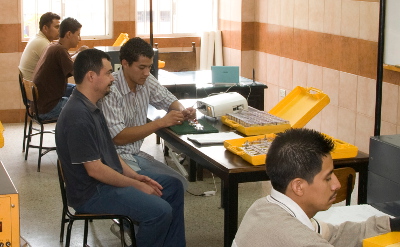 In 1983 in Jaltepec, Mexico, Bishop Alvaro del Portillo told a group of professionals and businessmen that there was a need for a major social service project in Mexico City. Six people took on responsibility for this project, and in 1991started a school for boys and another one for girls in one of the poorest areas in the outskirts of Mexico City. The project attempts to address one of the country’s most pressing social needs: high-quality education in low-income areas. Both schools offer programs at the pre-school, elementary, middle and high-school levels. Technical assistance and training is also provided to a large number of people. The schools currently serve 690 parents and 1600 students with a staff of 75 teachers. (www.educar.org.mx)

At the end of the 70’s, a group of people working in the agricultural sector saw a need for training programs aimed at helping farm workers and their families. This led in 1970 to the foundation of the Uruguayan Association of Agricultural Family Schools (AUEFA), which opened its first center in the town of Juanico in 1980. In 1987, one of the directors of the AUEFA met with Bishop Alvaro del Portillo in Rome, who reminded him of the importance for Uruguayan society of the work being done by their association, whose aim is to help farm workers improve their living conditions and those of their family. Currently, the first center to be opened has moved into a permanent facility and in addition to its professional development courses is providing basic education to 70 high school students. In March 1999, a second academic institution was set up, which today is providing training to over 50 students. In its 32 years of operation, AUEFA has helped 485 farm workers to improve their career prospects.