Donata is a hat designer for a well-known fashion firm in Rome. Many of her designs are used in international movie productions. 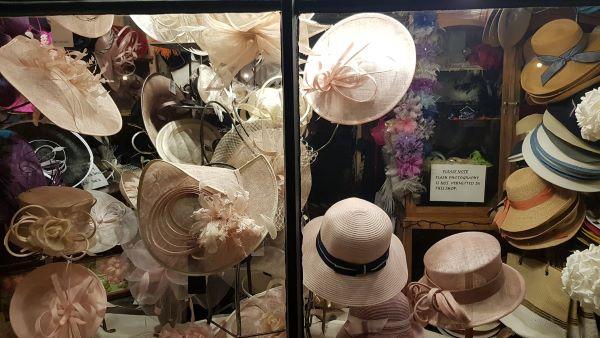 In many movies, the wardrobe used by the actors includes a variety of head coverings, such as lady's hats, wide-brimmed sombreros, crowns, diadems, and even helmets.

Donata’s work is to design this type of headwear, frequently subject to the approval of the great designers of Hollywood and other international film studios. “After working for 15 years in a bridal shop,” Donata says, “I found a job in a shop specializing in hats.”

What is required to becoming a fashion designer? As in many other professions, a certain amount of natural talent is helpful: “My mother had a sewing machine,” Donata recalls, “and when I was still quite young, I designed costumes for my nieces and nephews. I came to Rome for a vacation, and a cousin of mine convinced me to look for work here. My manual abilities helped convince a company to hire me.”

When working in Rome, she had the good fortune of once being asked to design a hat for Pope John Paul II. In Rome she also met someone in Opus Dei, a Numerary Assistant, who used to go to the same swimming pool as Donata. “She invited me to a center of Opus Dei,” Donata recalls, “and I was impressed to see so many cheerful people there who found happiness in their work and home life. Shortly after, I asked for admission in Opus Dei as an Associate.” After working for some time for a bridal shop, she was hired by Laboratorio Pieroni, where she still works today.

Despite being a creative profession, the work atmosphere in which Donata carries out her profession can be quite trying. Competition is fierce, both among colleagues as well as other shops, and the salary is not especially generous. But from time to time she receives recognition for her work that makes her very grateful: “Like that time,” Donata recalls, “when a designer who had won an Oscar for best costumes congratulated me for my design.”

“When I started to work in the new shop, I didn’t hide the fact that I was a Christian, and tried to transmit the beauty of the faith to my colleagues, but I received in exchange mostly criticism. At first I was hurt by these comments, but over time I learned to smile and not give it any importance, although at times it wasn’t easy to do so. For example, I once found the image of Saint Josemaria that I kept on my work table torn to shreds, and the crucifix I kept there to remind me to offer my work for specific intentions disappeared one day.”

Donata, like everyone else, finds some jobs more enjoyable than others. “I love flowers, and when my work involves making cloth flowers, for example for a lady’s hat, my eyes light up.”

“I try to go to Mass every day, and I know that I should share this grace with others in some way; it can’t be for me alone. I like my work and try to always be cheerful. At times while working I pray the Rosary. I put ten pins in a pin cushion and pull them out one by one for each Hail Mary.”