For the feast of the Exaltation of the Holy Cross on 14 September, here are some extracts from the book "Memories of Blessed Josemaría Escrivá" by Bishop Javier Echevarria. 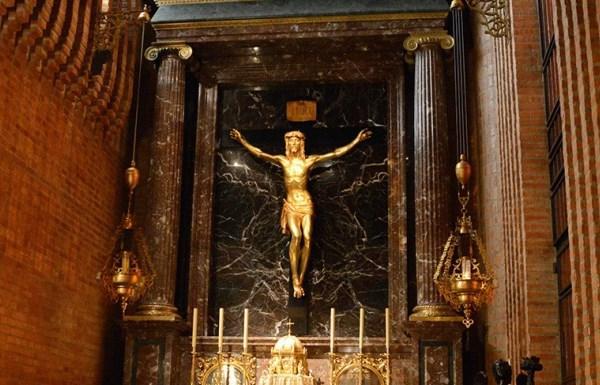 The founder of Opus Dei always had great devotion to the crucifix, and he expressed this, among other places, in no. 302 of his book The Way.

He recommended to people that they kiss it on beginning their work and again on finishing it, on going to bed and getting up, while making an act of faith, hope and love, asking God that we may make up in our own lives, as Saint Paul said, “what is lacking in the suffering of Christ.”


I myself witnessed how devoutly, every night, Saint Josemaría would kiss the crucifix he used during the day, placing it afterwards in the pocket of his pajama-jacket. He wanted to feel it close to his heart when he woke up in the night.

In Rome, he had two life-size images of Christ on the Cross sculpted. The first was placed in an oratory, with an inscription bearing Saint Peter’s words of contrition for having failed Christ: “Lord, you know all things, you know that I love you!” (J n 21:17). The second was placed in a little patio, with the inscription: “For you, O God, are my strength” (Ps 42:2). He also had crucifixes made for the Inter-regional Center of Opus Dei in Rome and the shrine of Torreciudad in Spain. They show Christ nailed to the Cross, before he died, with his eyes open, looking at those who come to pray before him. In 1970, during his stay in Mexico, he received some photographs of the clay models for these crucifixes. 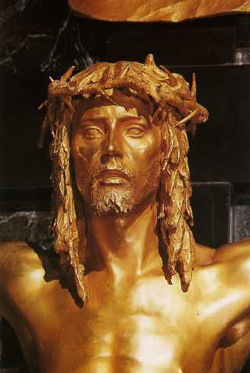 In a later gathering he said: “I’ve had a sculpture made of Christ Crucified, but without the wound of the lance. Christ still alive, dying in the most atrocious sufferings; and dying joyfully – he gave himself up voluntarily – to obtain our redemption and our love. I want us to be able to look at that image of Christ, suffering but full of peace, for you, for me, for everyone; to resolve to react with total self-giving and without holding anything back, even though it means giving our lives. They sent me a photograph of the sculpture, and I am deeply moved. The sculptor has modeled a face that bears a strong resemblance to the sculptures he did of Mary, and I like it so much. I could see why he did that, to show the union there was between Mother and Son, between the Son and all of his brothers and sisters, meaning us.”

Saint Josemaría’s devotion to the Cross was also shown in the wooden cross found in all of Opus Dei centers, and which he referred to in nos. 178 and 277 of The Way.

I think that something he said in 1957 sums up the strong, joyful love he felt on contemplating Christ’s sufferings: “Let us adore the Cross. It is the sign of the Christian, and the sign of Christian victories. Cross and Blood: what must that wood have looked like after the death of our Lord! The Cross was soaked in the Redeemer’s Blood; and so when you see a Cross, think of the Blood of Christ, poured out for you, and don’t deny him what he is asking you for. When we opened our first house, I had a cross put there without the Crucified Christ, as a shout, a cry, a loving act of atonement to our God, an invitation to each of us not to despise the sufferings we may meet in our lives.”

He had a great devotion to the Way of the Cross. We thought it entirely natural when, for Epiphany one year, he asked for a portable representation of the Way of the Cross as a present, so that he could have it constantly by him and contemplate the scenes of the Passion that he loved so dearly.

I often followed the Stations of the Cross in prayer with him, and with Monsignor Alvaro del Portillo, and I could see how devoutly he knelt down after each station was read out. He used to contemplate those scenes on the road to Calvary every Friday, and very specially on the days of Lent.

He encouraged us to keep those moments, in which mankind’s salvation is accomplished, in our minds like a film, so that in any circumstance we could take part in the scene as one of the people there, to repent of our faults, to keep Jesus company, and to feel an obligation to be co-redeemers. 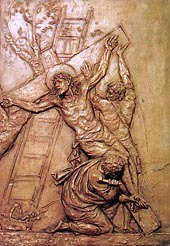 On September 14, 1969, with deepest reverence, he showed us a reliquary of the Holy Cross, and spoke to us at length about our Lord’s Passion and Death. I will quote a few extracts from that conversation.

“We love – we should love – the Cross sincerely, because where the Cross is, there is Christ with his Love, his presence that fills everything… And so, my sons, with the spirit of the Work we can never run away from the Cross, from this holy Cross, in which we find peace, joy, serenity and strength… In this reliquary that we have here, we venerate a fragment of the Lignum Crucis, the Wood of the Cross, which is kept in the church of Santo Toribio de Liébana. The Bishop of Leon gave it to me many, many years ago. It really bothers me when people use the Cross as a synonym for difficulty and mortification. The Cross is something positive, and has been ever since God chose to give us true life through the Cross. After Benediction we’ll come up and kiss the Cross, saying sincerely that we love it, because we no longer see in the Cross something we find or might find difficult, but the joy of being able to give ourselves, stripping ourselves of everything in order to find all the Love of God.”

In 1970 Saint Josemaría urged us: “Only if we unite ourselves continually to the Passion of Jesus Christ, will we be able to be useful instruments on earth, even though we are full of wretchedness.” It is impossible to cite exhaustively all the many considerations he made, but I think that in a way, what I heard him say in Holy Week that year sums up his personal union with the Sacrifice of the Cross. He said: “Our Lord’s Passion: that’s where we get all our strength. When I think about the Passion of Jesus Christ, there comes to mind straight away all that I’ve done in these forty-two years of my life in Opus Dei, and in those other years when the Lord was preparing me, before it began. And I see myself as nothing, and less than nothing. I’ve only been an obstacle. And so every day I feel the need to become little, very little, in God’s hands. Like that I console myself with what I have so often written: what does a little child do? He gives his father a headless toy soldier, an old cotton-reel, a glass bead. And I do the same: the little I have, I want to give to God really and truly. Then my littleness, merged with Christ’s Passion, has full redeeming and saving effectiveness: nothing is lost!”