Life in a University Residence

Haseen S. Aswani, a Hindu, is a student of pharmacy and the dean of the Alsajara University Residence in Granada, Spain, a corporate work of Opus Dei for women 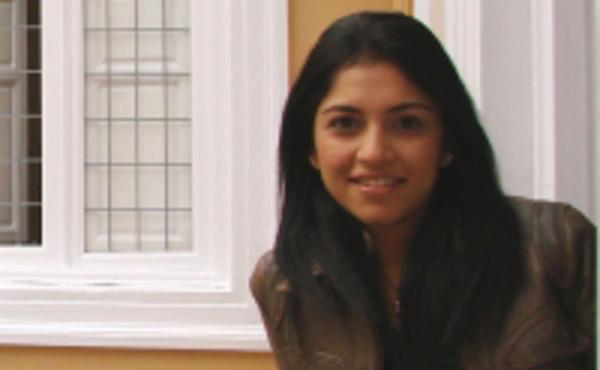 Haseen was born in Las Palmas, Grand Canary, but her family belongs to the Sindhi caste and comes from Hyderabad Sind. Like so many other business people they had to leave their homeland when India and Pakistan were divided in 1947. When Hyderabad Sind ended up inside Pakistan, the exodus began. Haseen’s parents went to live first in Morocco and later in Las Palmas. They settled amidst the large Hindu community there, where Haseen was born and grew up, and chose to maintain the culture, customs and religion of their ancestors. Now she is in the fourth year of her pharmacy studies and is the dean of Alsajara University Residence, where she has lived since she arrived in Granada to begin her university studies.

Haseen, first of all, what does it mean to be the dean of a University Residence?

Why did you decide to live in a University Residence such as Alsajara, which is a corporate work of Opus Dei?

I first heard about Alsajara through one of the tutors in my school back in Las Palmas. When I came to visit with my parents, we were impressed by the facilities and the services that were offered. But above all, we liked the fact that it was a small and very inviting place. We found a family atmosphere which for us is so important. It was an easy place to make friends—with your roommates, with the other girls who live in nearby rooms… The get-togethers after meals also helped me to share my life with the others and to get to know them better. I soon found myself with many new friends. When I leave, the most important thing I will take with me are the many really good friends I have made here.

And now, over time, you have ended up as the dean. How did this come about?

I don’t know. I do remember that shortly after I arrived, the dean that year spoke to us to give us some indication or information and I thought: "Wow, she’s much more responsible than the rest of us!" And I never saw myself doing that. But little by little, you get involved. You go from being a bit passive to taking a greater interest in the others and you want to help. You want to help the others and to help the residence. And so you think about taking on more responsibility.

Looking back on the years you have spent here, what have you gotten out of the residence?

An awful lot. From learning to get along with others I hadn’t known before, to really being able to concentrate on my studies and get involved in the university world, thanks to the services the residence provides. Here people put a lot of emphasis on study. They encourage you to immerse yourself fully in your career plans and make the way easier with orientation, activities, etc. Besides, the tone of the residence adds a lot. There are cultural get-togethers with professionals from all sectors of society, extracurricular courses that are given right in the residence, and other activities as well. All this will always be a part of me. And the day-to-day living together with people from many different places: people from the United States, Mexico, China, Germany.… All this means that everyone has to make an effort so that the others will feel at home. And this too is very enriching. I could say the same thing about personal matters. In this residence religious formation is very important, and whether you are Catholic or practise another religion (as in my case), life in the residence helps you to realize that being young and being in the university is perfectly compatible with living your religion.

One question: have you found any difficulty in living your own faith here in Alsajara?

Not at all. On the contrary, the people here have shown interest in learning about my religion. And they have made it easier for me to practice my Hindu customs—for example, in matters of food.

How does the tone of a University Residence influence the people who live here?

People change; they mature. You see 18 year-old girls arrive from "their" home, from living with "their" father or "their" mother, with "their" way of eating, with "their" room, with "their, their, their…." And they have to put aside their "their," because they are going to share a room with two other persons, and the bathroom, and the meals.… They are going to have to share everything, because (and this is the key), living together means to share. I have also known girls who at first seemed to be distant, haughty, unreachable, and after a few months they become very sociable and open. At times it’s simply shyness, which they overcome because the setting makes it easy.