To stress the family spirit of the home in Bethany where Jesus loved to stay, Pope Francis has established the memorial of Saints Martha, Mary and Lazarus, replacing the previous memorial of Saint Martha. 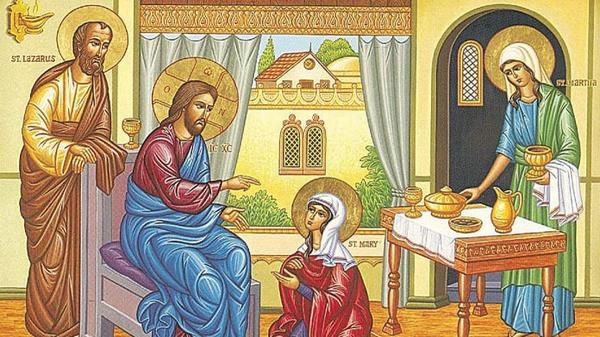 Christ with Lazarus and his sisters Martha and Mary, Orthodox Icon (photo from Crossroads Initiative)

From the Decree of the Congregation for Divine Worship on the celebration of Saints Martha, Mary and Lazarus (26 January 2021):

In the household of Bethany the Lord Jesus experienced the family spirit and friendship of Martha, Mary and Lazarus, and for this reason the Gospel of John states that he loved them. Martha generously offered him hospitality, Mary listened attentively to his words and Lazarus promptly emerged from the tomb at the command of the One who humiliated death.

The traditional uncertainty of the Latin Church about the identity of Mary (the Magdalene to whom Christ appeared after his resurrection, the sister of Martha, the sinner whose sins the Lord had forgiven), which resulted in the inclusion of Martha alone on 29 July in the Roman Calendar, has been resolved in recent studies and times, as attested by the current Roman Martyrology, which also commemorates Mary and Lazarus on that day. Moreover, in some particular calendars the three siblings are already celebrated together.

Therefore, the Supreme Pontiff Pope Francis, considering the important evangelical witness they offered in welcoming the Lord Jesus into their home, in listening to him attentively, in believing that he is the resurrection and the life, and accepting the proposal of this Dicastery, has decreed that 29 July be designated in the General Roman Calendar as the Memorial of Saints Martha, Mary and Lazarus.

English texts for the Mass

Some resources for this memorial:

As in a Film: A Place Where Jesus Can Rest

Commentary on the Gospel: The Resurrection of Lazarus