From Mumbai to Pope Francis

Joshua Gomes is a Mass Media student at Mumbai University. He recently travelled to Rome to participate in an international congress on “The Ecology of the Human Person and His Environment”. 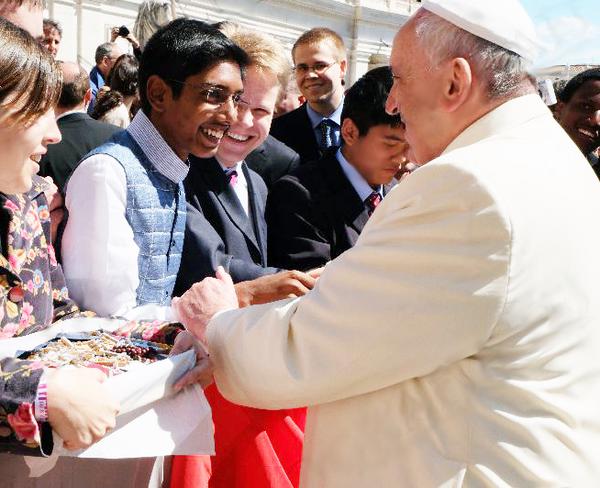 I should have travelled to Rome in 2013; it was my grandfather’s wish and he really did everything to encourage me to go. Unfortunately, there were some complications in the process and at the last minute I couldn’t make the trip. I think it was providential, because a few days later my grandfather passed away, in Mumbai, and I was able to be close to him.

Almost twelve months later, I had a new opportunity to go to Rome and participate with some friends in an international congress for university students. Luckily, there were no classes in college scheduled over the period of the congress.

Apart from the usual process of getting the proper visa and buying some stuff for the journey, I had to study for my college exams which I finished just the day before I left. Some of my friends who were also going, spent many hours preparing a presentation for the congress: research, discussions, ideas, order of the presentation, rehearsal, etc. I helped out in the presentation in Rome. All the effort was worth it because we received second prize for our contribution.

We knew that, once in Rome, we would have the possibility of participating in an audience with Pope Francis, together with thousands of pilgrims. We also knew that some students in Italy were planning to give to the Pope, during that audience, a collection of letters and messages that people from different countries wanted to send him.

Having it in mind, we thought that it would be great to carry a letter with us from Mumbai as well. But who would write it? We thought of Sebastian, who lives in a home for disabled people for more than 30 years now, after being struck by polio when he was a child. He was delighted to write and send the letter. And, I was excited to deliver it personally to Pope Francis.

The whole trip assumed a new angle for me. That Wednesday morning I was at St Peter’s Square earlier than the rest of the group. It was important for me to be punctual so that I could be ushered to the place where we would meet the Pope.

From the moment the Pope mobile came in, St Peter’s was astir. Everyone waving, clicking photos with their phones, shouting slogans; it was all very beautiful and moving. And then the moment came for the Pope to deliver his address. And after that the Pope spent a long while meeting different people, among them several men and women in wheel chairs.

Then, in what seems like a flash, the Pope was right there in front of me. His countenance inspired confidence and I wasn’t as nervous as I expected to be. There were about eight of us from different countries —that I remember: India, Italy, Hong Kong, Kenya, Spain, the US— who were going to meet the Pope. I kept thinking of what I would say. When giving him the letter of Sebastian, along with others, he smiled and held both my hands as I told him my name and that I was from India.

After the audience we received some rosaries and pictures of the Pope that he blessed and wanted to give to the people who had written those letters to him. What a lovely detail. How happy Sebastian was to receive this gesture from Pope Francis.