Cheerful despite my sickness

Ashish Tirkey is a student and lives in Rourkela, Orissa. For the last five years, he has undergone 23 cycles of chemotherapy. The 21-year-old gives an account of how the message of Opus Dei has helped him since he was first diagnosed with cancer in 2004.

In 2004 I had just finished sitting my 10th Standard Board Exams. One day I was coming back home from tuitions feeling very tired. As I yawned, a rather unusual thing happened: a grasshopper entered my mouth! I swallowed it with not a little difficulty. When I told my mother this, she dismissed it as a silly thing. She told me to take some honey to relieve the discomfort in my throat. A week went by, but the pain continued. Then I started getting high bouts of fever. I went to see a doctor. After examining me, he didn’t say anything to me; he just told me to call my parents. I asked two or three times what was wrong until he said: “Do you know how big your lymph gland is? It’s about the size of a tennis ball!” He recommended a biopsy. Both Mum and I were frightened that they wanted to cut off my throat.

I was told that I should go to Delhi for treatment at the same hospital where my aunt, who is a Cooperator of Opus Dei, works as a doctor. I had no idea that they were going to take me to a cancer institute. When I saw the signboard I was totally depressed. 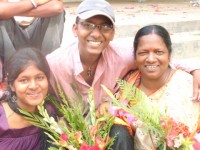 At first the doctors were vague and kept saying it’s a type of cancer. Eventually though, they told me that I was suffering from Non-Hodgkin lymphoma. I was upset. They started chemotherapy in October 2004.

Before the treatment was started, I saw a book about the founder of Opus Dei and asked my aunt what it was about. When she explained, I thought to myself, “Oh my goodness! I found what I have been looking for since I was a young boy!” I went through the book; it was a biography of St Josemaria. On 2nd October 2004, I went to the Sacred Heart Cathedral in New Delhi for a Solemn Mass commemorating the canonization of St Josemaria. There I made friends with some people of Opus Dei.

As far as I was concerned, cancer was a deadly disease and I felt sure my life would come to an end. The first session of chemotherapy gave me dizzy spells and I was vomiting. I was wondering how to live as a good son of God in such conditions when the friends I had made on 2nd October taught me how to pray and to offer up to God the discomfort and pain I was feeling. I got fevers because of the low white blood cell (WBC) count. When the WBC returned to normal, the fever would subside, and two or three days later they would start chemotherapy again. Most of the time I was feeling unwell. Nevertheless, I started offering up the dizziness, the vomiting and all.

After the second cycle of chemotherapy, I felt very weak and I had lost all my hair. I was 16 years old. At that time, I couldn’t speak to my Mum. We couldn’t speak to one another. We would just look at each other because we were so dejected. Some friends we have in Opus Dei were a bridge between mother and son. My mum used to talk to a friend of hers who would advise her; I too was being counselled, and through this we were able to start talking to one another again. By now my Mum and I had started using the prayer card of St Josemaria everyday asking for a cure.

The doctors, then, gave me chemotherapy for 6 cycles. I thought that I was fine after that. I went back home and joined my classes. During a second medical check up, the doctors said there had been a relapse. This time, the cancer had moved towards the liver. I was very upset. When you think you’re one hundred percent ok and the doctors tell you that you are not well, it’s tough. But once again I was consoled to hear from someone that this was the Will of God for me and God would not test me more than I was capable of enduring.

In 2005, we moved from Delhi to Mumbai looking for better facilities for a more specialized treatment, when I started a new chemotherapy for 8 cycles. I knew what to expect. Still, the medicines caused me to get easily annoyed. I also didn’t want to stick to my diet. I only started eating what I was told when I was advised to offer up this detail to God. I realized that I shouldn’t bother my Mum any longer and ate what she told me to. The therapy went on till about October 2006 when, feeling better, I was able to go back to Orissa and to the school that I had had to discontinue for many months.

In 2008, though, there was a third relapse. This time the doctors were planning to do a bone marrow transplant. It was a last resort. They first had to administer a heavy dose of chemotherapy before the transplant. They gave me three cycles and then shifted me to another hospital. I received six more cycles of chemotherapy because they detected a high level of lymphoma. That caused a heavy infection of mucositis that stopped me from speaking, or eating or drinking. For two weeks I was lying in bed, with one hand strapped for chemo and the other for the drip. They tried to do the bone marrow transplant four or five times. In that deep pain, I somehow felt a certain reassurance.

The message of Opus Dei has helped me to come out of myself. I was quite shy, perhaps interacting only with a close ring of friends. After meeting Opus Dei, I have made lots and lots of friends from all over the place. I have also learnt to live not as a patient, but as a son of God, as one working for God. So I have been cheerful and happy. When I was admitted, the nurses, and doctors used to come and talk to me. Even other patients would come to speak to me and felt inspired to see me cheerful despite my sickness.

Now at home, in Rourkela, I have started a small group called “Aspire to Inspire” and I have about 40 friends in it. I tell them about my own experiences on practicing patience, cheerfulness, love for my parents, friendship with God, etc.

I have had two check ups this year, and so far all the tests have shown that I am well. I thank God for this and for watching over me always.