A Love That Seems Excessive

Sergio Larrinaga died several months ago. A few days later his father Manolo also died. This is the story of Eloisa, the mother of Sergio and the wife of Manolo. 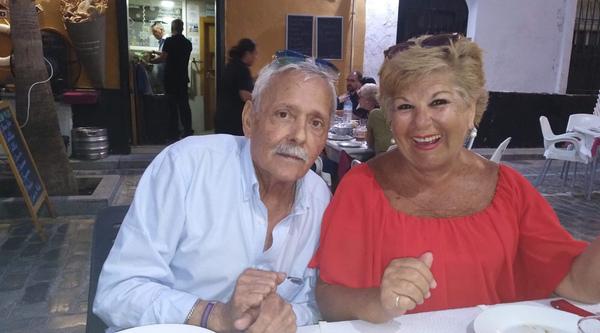 In March 2018 Eloisa was just leaving Mass on Sunday when she heard a faint cry: “Elitoo…” She turned around and saw her husband, Manolo, who had suddenly begun feeling dizzy. They brought him to the hospital, where he was diagnosed with prostate cancer and an aggressive bone metastasis, and was told he didn’t have long to live.

His children began to take turns visiting him in the hospital, but Eloisa took on most of the responsibility. “The children have their own families now, their work,” she says. In June he was released from the hospital and Eloisa brought him home.

It had been almost three decades since they had lived together, although she had never lost contact completely with her husband. In important family celebrations she had asked all the others in the family to call him. Five children, eight grandchildren, and two great-grandchildren formed a bond too strong to break entirely.

A marriage at risk

In 1991, Eloisa suffered a deep depression due to her husband’s gambling addiction, which led to frequent lies, absences, and a lot of suffering. They were living in Cadiz, and their children were now legally adults, so one day she left Manolo and returned to the neighborhood by the shore where she had grown up.

Eloisa had stopped going to school when she was twelve, but she was never without a job, even when her children were young. First she sold cosmetics and later cared for sick people, which opened up a completely new horizon for her, also in her own home.

Besides her husband’s gambling addiction, she also had to face the addiction of one of her sons, Sergio, their fourth child. From the time he was quite young he needed special care. He suffered night-time terrors that the doctors didn’t give importance to, but that were a sign of an underlying psychological problem. And as he grew older other problems arose. These were the years of the exploding drug culture and ecstasy pills. Sergio was hooked.

Struggle against the stigma

In1993 her life was still in disarray. One day she encountered a childhood friend who invited her to a catechism class in Holy Rosary Parish. “It sounded silly to me, but I went.” There she found new strength. She started to have a reason for getting up in the morning: to meet with her new friends and learn more about the faith. At first she didn’t even know how to pray, nor what the others were talking about. “They spoke about ‘the Lord’ and I didn’t know who he was. I had always simply called him God! As a small child I had been told that he sees everything; and he’s going to punish you…”

But something began to awaken within her, and she began to pray. So much so that people started calling her “that lady who’s always praying in church.” She asked questions about every aspect of the faith without any shame. “I learned a lot and continue learning, although I’ll soon be 70 years old.” She went to confession, something she hadn’t done for almost 30 years. She began to attend a “families anonymous group,” made up of persons who had family members with problems of all types, and she ended up coordinating it. In 2007 she founded Women of Steel, an association to help people in her neighborhood who were facing situations like her own. “It hurts me a lot that people become accustomed to seeing addicts lying on the street. They are persons who are sick, and we have to learn to understand them, not to judge or stigmatize them.” 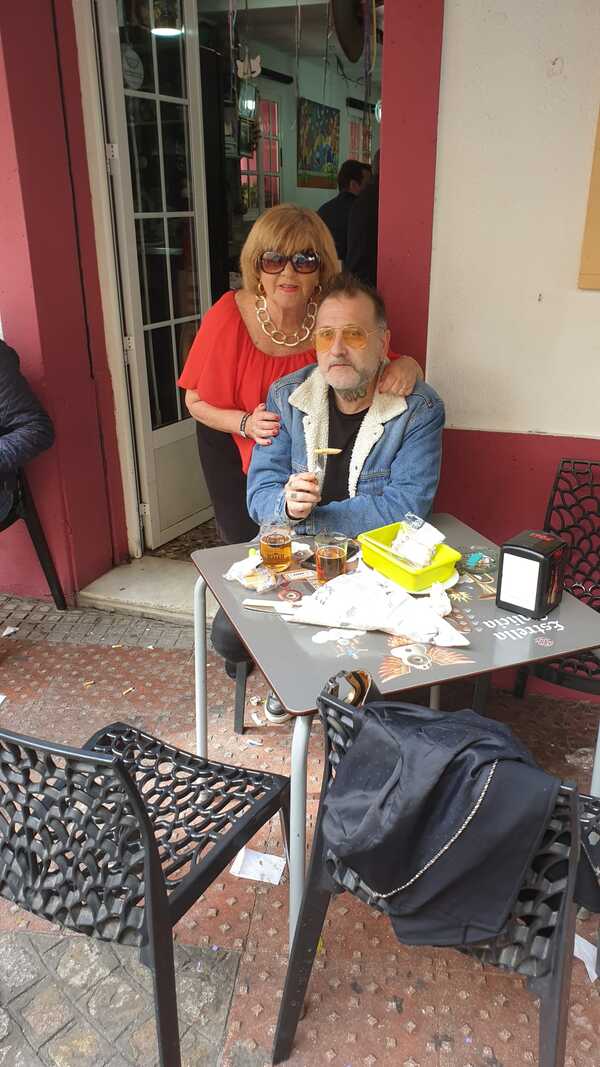 “I know that God has given me a charism to care for sick people no one else wants. But that is Christ’s charism. In my home eight members of my own family have died, whom I have cared for personally. I have learned to care for a person with necrosis, to put a probe in place… People from the mobile medical clinic sometimes call me and ask me to speak with the families of other sick people.”

In 2015 she met Mari Toni, “a Supernumerary of Opus Dei, who has been my guardian angel.” Through her encouragement, Eloisa went on her first retreat. On the way there in the car, two friends with her never stopped talking about all their misfortunes and she began to get depressed. Fortunately, the husband of one of them, who was driving, realized what was happening and said: “you’re going to scare her with all these stories.” As she herself says, “We can’t be prophets of doom! We have to infect others with our joy; the Holy Spirit knows what we need at every moment. I always ask God for this.”

A year later she asked for admission to the Work. “I am very happy. Opus Dei has given me a strong bond with others. It is a great family, not biologically, but certainly among souls, where we pray for each other. When someone close to me, also those who attend daily Mass, is going through a tough time, I take them for a short walk because we all need help.”

When the others in the neighborhood heard she had joined the Work, they didn’t believe it. In the past she had frequently spoken badly about Opus Dei, but now she did all she could to make it better known: “Ignorance makes one very bold in saying things. I know because I too used to criticize a lot.”

Manolo’s return home was hard on her. Moreover, a few months later Eloisa had to call an ambulance for her son Sergio, who had overdosed on drugs. He came out all right, but it was not the only time she confronted a crisis of this type. On several occasions people had called to tell her “your son is sick in this or that place,” and she went to find him. “He lied more than he blinked, but I loved him so much that I couldn’t keep from caring for him. He has suffered a lot: he was depressed, he had phobias…”

Every day after Mass she stayed for a while to ask God to help her son. Finally she decided to take him to someone she had known when she was young and who was now working as a psychiatrist. Sergio was diagnosed with a bipolar disorder. 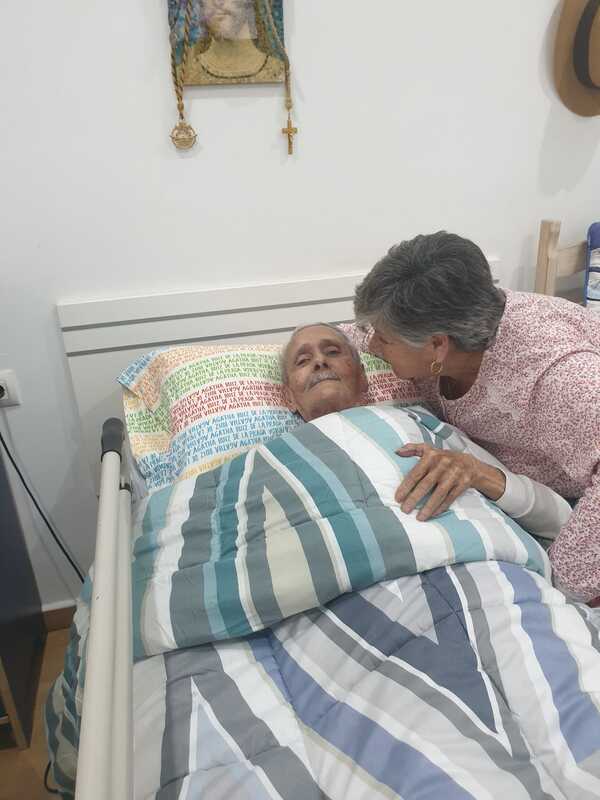 Faced with the facts, Eloisa realized she had to care now for both her husband and her son. Since her home is a very small studio and there wasn’t enough room for the three of them, she rented a cheap room on a nearby street. When her husband grew worse, she stayed with him and her son went to the rented room; when the opposite was the case, they exchanged places. The one living in the rented room went to Eloisa’s house to eat and bathe… Things went on like this for a year and a half.

With her care and affection, her son improved and was able to continue working at his profession: composing and playing music. Caring for both of them was hard on her. Manolo was little by little growing worse. One day she too had a bout of high blood pressure and had to be taken to the hospital. “I told God: if my time has come, let your will be done, but you know I can’t leave my children in this situation…” And she got better.

In February of this year, Sergio died unexpectedly. He was 45 years old. She didn’t say anything about it to her husband, who was now very sick. She told him that everything was going well, but burst into tears when she was alone.

Eloisa stayed with Manolo day and night. She hired a woman to stay with her husband for an hour while she attended Mass each day: “because I knew I couldn’t miss Mass; that’s where my strength came from.” Manolo died at home a few days after Sergio, surrounded by the love of his family and after receiving the anointing of the sick.

The other children are very grateful to their mother. They have learned from her what it means to forgive and what love can achieve, how happiness can be found even in the midst of suffering. “You can forgive, you can welcome… you can do everything! God gives you the necessary graces. God gives you everything. I am heartbroken because what has happened has been very hard, but I have the sureness of knowing where they are and that sureness is my consolation and my hope. Both have died surrounded by affection, by God’s infinite love, and with their eyes fixed on Heaven.”

She is sure that when Sergio wrote his march El Amor (which the famous Spanish rapper C. Tangana used in one of his popular videoclips), he was thinking of her. Love can never be too great, but in Eloisa’s case it can sometimes seem excessive.

In the video below (in Spanish), Eloisa talks about her efforts to care for her husband and son during the past few years: