2015 is the Year of Consecrated Life in the Church. St Josemaría always loved and venerated the religious. A hand-written note of his, addressed to members of Opus Dei, says: A great mission of ours is to bring people to love the religious.

2015 is the Year of Consecrated Life in the Church. It was inaugurated with a Mass celebrated by the Holy Father Pope Francis on February 2.

St Josemaría always loved and venerated the religious. A hand-written note of his, addressed to members of Opus Dei, says: A great mission of ours is to bring people to love the religious. 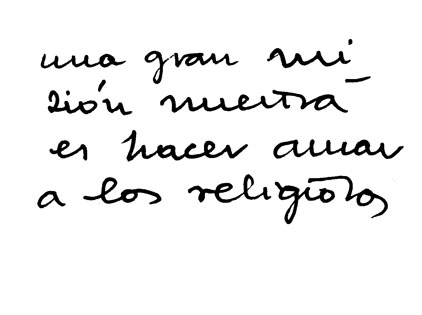 In his preaching and writings, St Josemaria would often quote St Teresa of Avila, St John of the Cross, St Theresa of Lisieux, and other Carmelite saints. He had a particular affection and devotion for St John Bosco.

His deeply Christian family counted among its members several priests and religious sisters.

When he was seven, he went to the Piarist Brothers school in Barbastro  interestingly, also the first Piarist-run school in Spain. A Piarist Father, Father Manuel Laborda de la Virgen del Carmen (1848-1929), taught him religion, history, Latin, and handwriting, prepared him for his First Holy Communion, and taught him a prayer for spiritual communion that he used all his life and passed on to thousands of other people. The prayer is:

I wish, Lord, to receive You with the purity, humility and devotion with which Your most holy Mother received You; with the spirit and fervor of the Saints. 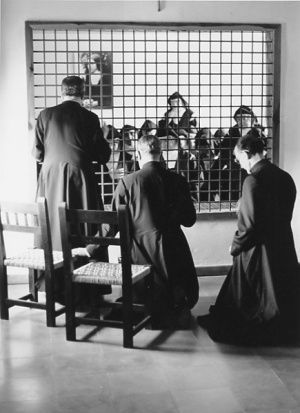 Our Lord made use of a devout Carmelite friar to show St Josemaria his call to the priesthood. When still a youth, St Josemaria was deeply moved by seeing the bare footprints in the snow of Father Jose Miguel de la Virgen del Carmen at Christmas 1917-1918 in Logrońo.

He went to speak to him, to discern what God was asking for him, and decided to become a priest. He always had a great love for the Carmelite Order, and remembered Father Jose Miguel with gratitude; they met again in Burgos in 1938. Father Jose Miguel died on September 23, 1942.

When he moved to Madrid he was in contact with several very holy nuns, such as the foundress of the Damas Apostolicas, or Mercedes Reyna OFarrill, a religious of the Foundation for the sick, who was born in Havana and died with a reputation for holiness on January 23, 1929. St Josemaria attended her spiritually during her final illness and felt impelled to pray to her for protection after her death.

An Augustinian monk, Father Eduardo Zaragueta, bore witness to St Josemarias love for religious in the San Sebastian newspaper La Voz de Espańa, July 8, 1975. We Augustinians have heard about his character and his friendly simplicity when he gave a spiritual retreat in the Monastery of San Lorenzo El Real, in El Escorial. Escriva loved St Augustine and the rich tradition of the Order he founded seventeen centuries ago, in circumstances very similar to the present.

Brother Joaquin Sanchis Alventosa, a Franciscan, who worked in several leading posts within his Order and took an active part in the Second Vatican Council, has not forgotten Opus Deis first steps in Valencia, around 1939. The house in Samaniego Street, where there was a students residence, was close to his priory, San Lorenzo, and the director of the residence requested an Augustinian to celebrate daily Mass in the residence and to give Benediction of the Blessed Sacrament every Saturday. A deep friendship sprang up, and Brother Joaquin speaks in glowing terms of the affection and deference with which we Franciscan friars were treated by those university students who were learning to live according to a lay spirituality. Their veneration for us proved the love for the religious state which Msgr. Escriva infused into those sons of his, who were pursuing holiness amidst their professional work. 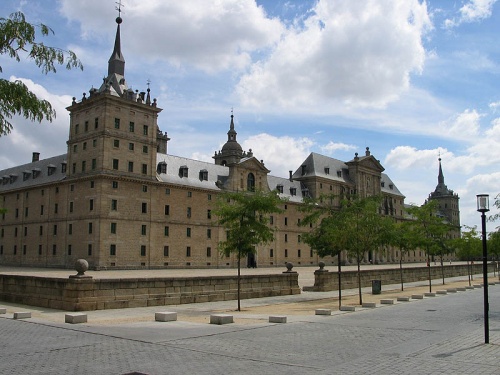 It was quite clear  as was confirmed by the universal Church years later  that life in Opus Dei is very different from the religious vocation. But this sharp difference was not a reason for separation; it led to mutual admiration and affection. Brother Joaquin was delighted to be treated so affectionately by some university students; in his turn, with true greatness of spirit  Christian magnanimity  he rejoiced to see Gods mercy at work in the activities organized by Opus Dei. Many ex-pupils of our Franciscan schools have told me about the decisive role played in their lives by the apostolate of Opus Dei when they got to university. Many of them have received a vocation to Opus Dei. I now recall how happy I was to meet, in Rome, one of my beloved ex-pupils, who had been ordained as an Opus Dei priest.

The Founder of Opus Dei, St Josemaria, spread throughout the world the universal call to holiness, especially for lay-people. But, as Father Aniceto Fernandez, former General of the Dominicans, recognizes, that fact never meant that St Josemaria or any of the faithful of Opus Dei despised or criticized the religious life, or belittled in any way the excellence of the religious vocation.

Another practical proof of St Josemarias love for religious is the decisive help he gave in the restoration of the Hieronymite Order in El Parral, Segovia, Spain, from 1940 onwards. The Hieronymite monk Jose Maria Aguilar Collados testifies that he owes his vocation to Msgr. Escriva de Balaguer, and goes on to give the names of some other students whom St Josemaria also confirmed in their calling as religious.

St Josemaria went out of his way, without neglecting his own duties, to give spiritual care to religious when they asked him. Blessed Alvaro del Portillo recalled the retreat that he preached in El Escorial: 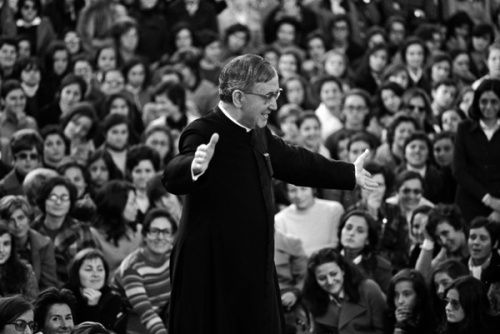 From October 3 to 11, 1944, the founder preached (as I have already mentioned) a retreat for the Augustinian monks of the Monastery of El Escorial, at a time when he was in very poor health. He had a virulent boil on his neck and a very high fever; it was also during this time that he was diagnosed as a diabetic. Even so, he kept his promise of preaching to them. The Augustinian provincial, Fr. Carlos Vicuńa, wrote to me on October 26: I would like to convey to you a brief impression of the spiritual exercises preached by Fr. Jose Maria Escriva to the Augustinian religious of the Royal Monastery of El Escorial, in this month of October. Everyone agrees he has surpassed all expectations; he has completely satisfied the desires of the superiors We are now waiting on God, expecting that the fruits will be abundant. Everyone without exception  every one of our fathers, theologians, philosophers, brothers, and young men in formation  was hanging on his words and, as the expression goes, holding their breath. Every one of those half-hour conferences seemed to them to last only ten minutes, overpowered as they were by that torrent of fervor, enthusiasm, sincerity, and outpouring of the heart. It comes from within  he speaks that way because he has an inner fire and life; he is a saint, an apostle  if we outlive him, many of us will see him raised to the altars These are some of the statements I have heard from the participants. The unanimity of the praises is highly unusual and remarkable, especially when you consider that the audience was composed mostly of intellectuals and scholars. Not a word was heard that was less than approving. It is true that he came preceded by a reputation for sanctity, but it is no less true that, far from gainsaying that reputation, he has completely confirmed it.

The miracle for the beatification

During the final years of St Josemarias life, whenever he could, he would visit enclosed monasteries or convents, to ask for their prayers and show his love for religious. He made several such visits during the catechetical trips he undertook in Spain and Latin America.

St Josemaria was a founder who opened up new paths of renewal in the Church and reminded lay-people of the universal call to holiness. A happy coincidence is that the miracle recognized by the Church for his beatification (prior to his canonization) was worked on an elderly religious sister, Sr Concepcion Bouillon Rubio. It was yet another confirmation of the veneration and love for religious felt by a Saint who brought to the Church a genuinely lay charisma.