The beatification of Alvaro del Portillo, the first successor of St. Josemaria as head of Opus Dei, took place this morning before a massive crowd, in a ceremony presided over by the delegate of Pope Francis, Cardinal Angelo Amato.

Madrid, 27 September: The beatification of Alvaro del Portillo, the first successor of St. Josemaria as head of Opus Dei, took place this morning before a massive crowd, in a ceremony presided over by the delegate of Pope Francis, Cardinal Angelo Amato, who was accompanied by Cardinal Antonio Maria Rouco, archbishop emeritus of Madrid, and Javier Echevarria, the bishop prelate of Opus Dei. 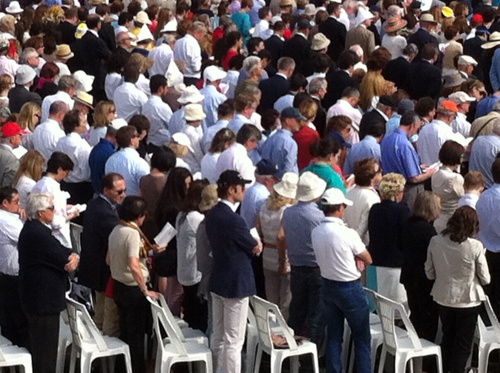 A message from Pope Francis opened the ceremony

The ceremony began with the Vicar General of Opus Dei, Fernando Ocariz, reading a message sent by Pope Francis. The Holy Father pointed out that Blessed Alvaro del Portillo teaches us that in simplicity and ordinary life we can find a sure path to holiness, reminding everyone that Blessed Alvaro went to many countries, fostering projects of evangelization without being inhibited by difficulties, moved only by his love for God and for his brothers and sisters. Whoever is very immersed in God knows how to be close to other people (full text at: www.alvarodelportillo.org).

Immediately following the solemn act of beatification by Cardinal Amato at 12.24, a picture of the new Blessed was unveiled for the faithful. His feast day will be celebrated on May 12 every year in the dioceses to be determined by the Holy See.

Another key moment was the bringing of relics of Alvaro del Portillo to the altar by the Ureta Wilsom family, whose son Jose Ignacio was miraculously cured thanks to the intercession of the new Blessed.

The universal outlook of the new Blessed was made manifest in the presence of hundreds of thousands of faithful from more than 80 countries and especially the participation of 18 cardinals and more than 150 bishops from all over the world.

Among those on the front row at the ceremony were more than 200 people with some form of disability, as well as representatives of the many social initiatives promoted by the new Blessed, particularly in Africa and Latin America. There were also many families and some Spanish and international civil authorities.

From very early in the morning, 1,600 big buses and a bus shuttle service brought the more than 300,000 people from the Metro stations to the 185,000 square meters of Valdebebas. They were thus able to wait for the start of the ceremony watching some audio-visual programs on 26 giant screens. They prepared themselves spiritually either by praying in the 13 chapels available or by receiving the sacrament of penance in one of the 80 confessionals spread throughout the area.

Homily emphasized Blessed Alvaro's faithfulness to the Gospel, the Church and the Pope

In his homily Cardinal Amato described some virtues which the new Blessed practiced heroically, such as his faithfulness to the Gospel, the Church and the Pope's Magisterium. According to the cardinal, Alvaro del Portillo always avoided focusing on himself, because he passed on the truth of the Gospel and not his own opinions. Among other things, he was outstanding for his prudence and rectitude in evaluating events and people; and his justice in respecting other peoples honour and freedom.

Cardinal Amato continued: Today Blessed Alvaro del Portillo invites us to a holiness that is friendly, merciful, approachable, meek, and humble... The saints invite us to bring to the heart of the Church and society the pure air of Gods grace, so that it can renew the face of the earth.

The huge turnout of the faithful was marked by piety and joyful singing, led by the 200-voice choir that had sung at the last World Youth Day. 1,200 priests distributed Holy Communion in Valdebebas.

Msgr. Echevarria: a special prayer for those who suffer persecution as a result of their faith

At the end of the celebration, Bishop Javier Echevarria, Prelate of Opus Dei, expressed his thanks to God, to the Church and to Pope Francis, as well as to Pope Emeritus Benedict XVI, to Cardinal Amato and to the Archdiocese of Madrid, the choir, the volunteers and the media, all of whom helped to make it possible for the ceremony to be followed by many people all over the world.

The prelate continued: the raising of Alvaro del Portillo to the altars reminds us anew of the universal call to holiness, proclaimed with great fervour by the Second Vatican Council. He also spoke of the joy that St. Josemaria Escriva would undoubtedly feel in seeing this most faithful son of his proposed as an intercessor and model for all the faithful. 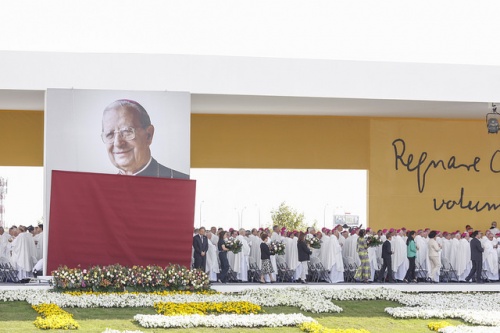 Bishop Echevarria asked those present to pray in a special way for our brothers and sisters who are suffering persecution for their faith, including martyrdom, in different parts of the world.

The Diocese of Madrid is proud of its son

In his closing remarks Cardinal Antonio Maria Rouco wished to point out the bond that exists between Alvaro del Portillo and the city of Madrid. "Not only for historical reasons but also because of the influence which his life and writings have had on the hearts of so many faithful of this Archdiocese. His footprints are also felt through the spiritual and social good done by the very many initiatives that owe their inspiration to him.

In conclusion, Cardinal Rouco said Blessed del Portillo, who was born here in Madrid, is ours in a unique way and so sends us special blessings from heaven. As a diocesan Church he added, we are very proud of the faithful help he lent to St. Josemaria in spreading the message of Opus Dei throughout the world and for the contributions he made to the Second Vatican Council.

At the end of the ceremony more than 3,500 young volunteers helped participants to leave Valdebebas on their way back to Madrid. While some returned to their countries, others will come back tomorrow for the Mass of Thanksgiving which will be presided over by Bishop Javier Echevarria, the prelate of Opus Dei.