Javi! And he added, in a much weaker voice, as Fr Javier came into the room, I dont feel well. Those were the last words on earth of St Josemaría, founder of Opus Dei. It was mid-day on June 26, 1975, in Rome. Fr. Javier Echevarría was the person to whom that final phrase was addressed, after twenty-five years of daily life together.

Javi! And he added, in a much weaker voice, as Fr Javier came into the room, I dont feel well. Those were the last words on earth of St Josemaría, founder of Opus Dei. It was mid-day on June 26, 1975, in Rome. Fr. Javier Echevarría was the person to whom that final phrase was addressed, after twenty-five years of daily life together.

He had joined Opus Dei in 1948, was appointed St Josemarías secretary in 1952, and in 1956 he was chosen as one of the Custodes, two people who, in accordance with Opus Deis statutes, always had to live with the President General (or, as he was termed from 1982 onwards, the Prelate) and help him in his daily life and work. In an interview, Bishop Echevarría recalled his impressions on the day he first met the founder of Opus Dei. 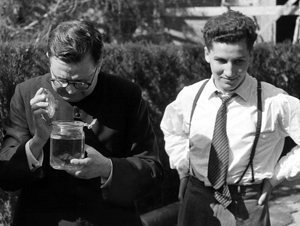 "It was in Madrid on November 2, 1948, in the Centre of Opus Dei in Diego de León Street in Madrid. I went to a get-together with other members of the Work, in which St Josemaría talked to us about faithfulness to our vocation and turning our lives into continuous apostolate. Afterwards he had to go to Molinoviejo, a conference centre near Madrid that was being restored at the time, and he asked three of us who were there to go with him, if we had time. He sang a lot during the trip, and showed us that we ought be very happy because of being children of God and because of having received the call to Opus Dei to serve God and souls. He emphasized strongly that we should orientate all human tasks and occupations to God; and he gave as an example the songs we had just heard him singing, which had surprised us at how natural, joyful and enthusiastic he was. He added that he used the words of those songs for his conversation with our Lord and with our Lady.

I was car-sick during the journey and we had to stop to clean the inside of the car and my clothes. St Josemaría helped me without any sign of disgust. He could see how embarrassed I was, so he treated me with extra affection and, once we were back in the car, made sure that the window was open so that I could get some fresh air, although it was cold for him.

Before I was sick he had been teasing us by pointing to some of the small, half-ruined buildings that could be seen along the way as though they were the conference centre. He was amused by our disappointed looks and laughed, No, thats not it, we havent got there yet! But after that he was concerned about how I was feeling, and asked me frequently, Are you alright? Dont worry, were nearly there; everythings fine. When we get there, theyll clean your suit for you, well get you something to calm your stomach, and youll feel better than ever. I was very much struck by the fatherly and motherly, and very natural, way he treated me; he talked as though we had known each other for a long time.

Some years later I began to work with Msgr. Escrivá de Balaguer. When I became his secretary, although I was still so young, he told me: All the cupboards and drawers I use, you can open and shut with complete freedom, and look at all my things. For me it was a proof of undeserved trust, if you think of the position and supernatural standing of the founder of Opus Dei.

When, in 1956, I became his Custos for material things, I saw for myself something Id once heard him say: that he lived in a sort of glass house, because those closest to him knew when he got up and went to bed, if he was in the oratory or working, when he had his meals, what time he left the house and who he was with. This was also partly because he was extremely orderly and he wanted to ensure that if anyone needed him he could be found straight away.

When I began working with him in the 1950s, I felt he was someone filled with good qualities, humanly speaking: friendly, approachable, affectionate, sympathetic, always ready to serve others, centred on others, with a great capacity for perceiving peoples needs and when they were worried about something. I also saw him as a good teacher, able to encourage and correct people as necessary; as a leader who inspired confidence in those working for him; and above all, as a priest and Father who, day by day, moment by moment, through his work, dedicated himself totally to the service of God and souls, immersed all the while in very intense prayer.