Reflections for Tuesday of Holy Week. The topics are: Saint Peter learned to be humble; lowering oneself to follow Christ; relying on God's strength. 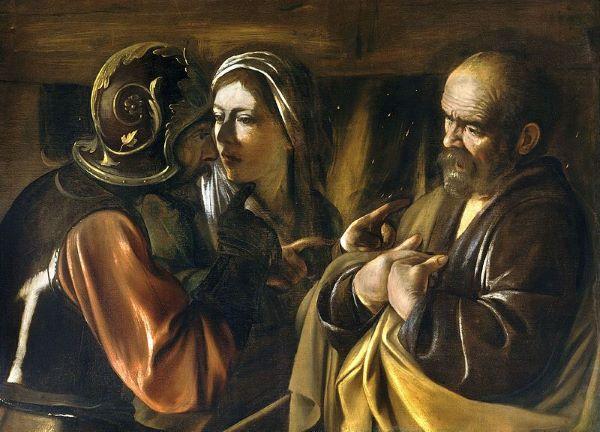 “WILL YOU LAY DOWN your life for me? Truly, truly, I say to you, the cock will not crow, till you have denied me three times” (Jn 13:38). The Gospel of today’s Mass foretells the denials on the part of Saint Peter. In the intimate atmosphere of the Last Supper, Peter is surprised by Jesus’ words. He doesn’t understand how he could ever do this. He wants to be faithful until death, and would never permit his Master to be handed over to his enemies to be crucified. Our Lord had already reprimanded him on a previous occasion, when Peter refused to accept Jesus’ words about his future passion and death. But Peter still cannot accept that apparent failure. As the liturgy reminds us this week: “The days of his saving Passion and glorious Resurrection are approaching, by which the pride of the ancient foe is vanquished and the mystery of our redemption in Christ is celebrated.”[1]

In his own way, Saint Peter thinks that he is ready to give his life for Jesus. In fact, he will draw his sword when Jesus is arrested and confront the crowd that comes armed to capture his Lord. He doesn’t lack courage or esteem for Jesus. But experience will teach him that these qualities are not enough. Peter still needs the humility that comes from self-knowledge and, above all, from the knowledge of God. Jesus continues forming Saint Peter right to the end. These lessons are the most important ones of his life. Peter will not be a rock because of his strength but because of the humility he has gained from knowing Jesus in depth. He needs to experience the insufficiency of his own strength, so that he realizes it is God who is going to uphold him.

THE ANNOUNCEMENT OF Peter’s betrayal in today’s Gospel is accompanied by the announcement of Judas’s betrayal, which helps us to grasp the great difference between the two. Peter put his weakness in Jesus’ hands. He learned not to focus on his mistakes and his own strength, but to trust in God’s goodness, in his divine plans, in his way of doing things. Peter wasn’t deceiving Jesus when he told him he would be faithful until death. But he was relying almost exclusively on his own strength, on his own abilities. Judas, in contrast, never acknowledged his betrayal before Jesus, and always tried to keep up appearances. Peter, at least when he was with Christ, didn’t care about appearances, although he will succumb to them when questioned by a maid in the High Priest’s house.

The fisherman from Capernaum could have been helped by these words of Saint Augustine: “Seek out your merits, your righteousness, your motives; and see if you find anything that is not grace.”[2] Saint Peter thought that his love for Jesus was already great, sufficient to withstand any test. He found it easier to remain faithful when confronted by the soldiers than when a young girl challenged him. The maid destroyed Peter’s confidence in himself. But it was a liberation that he needed. For Peter discovered the need for his own abasement in order to follow Christ closely. Freed from his own strength and goals, he was able to adapt to God’s plans and be faithful.

Saint Bernard said: “Do not consider, you who are a man, what you have suffered, but what He suffered. Learn, from everything that He suffered for you, how much He valued you, and thus his goodness will be evident to you through his humanity. The smaller he became in his humanity, the greater he revealed himself in his goodness; and the more He allowed himself to be abased for me, the more He is dear to me now.”[3]

“ALL TOO OFTEN, we think that God works only through our better parts, yet most of his plans are realized in and despite our frailty … The evil one makes us see and condemn our frailty, whereas the Spirit brings it to light with tender love. Tenderness is the best way to touch the frailty within us … faith in God includes believing that he can work even through our fears, our frailties and our weaknesses. He also teaches us that amid the tempests of life, we must never be afraid to let the Lord steer our course. At times, we want to be in complete control, yet God always sees the bigger picture.”[4]

It fills us with peace to know that God wants us to trust him and the good we have, which is also God’s gift. Saint Peter can be an example for us here as well. It fills us with serenity to discover that we can rely on our strengths and abilities – many or few – when we realize that it is God who will provide the increase with abundance. What joy it brings to realize that we don’t have to rely solely on our own talents for the mission that has been entrusted to us and that so clearly exceeds us! We are amazed and grateful on seeing how much God loves us, shown in his willingness to carry out wonders with our poor collaboration.

Saint Therese of the Child Jesus once said: “I understand very well why Saint Peter fell. Poor Peter, he was relying upon himself instead of relying only upon God’s strength ... I'm very sure that if Saint Peter had said humbly to Jesus: ‘Give me the grace, I beg You, to follow You even to death,’ he would have received it immediately ... Before ruling the Church that is filled with sinners, he had to experience for himself what man is able to do without God’s help.”[5]

Having learned this lesson, Saint Peter will be able to place at the service of the redemption all of his abilities – which, although borrowed, are a precious gift – and to rely on the strength of his Lord, who can do everything. As Saint Josemaría said, “when with a burning heart we say ‘yes’ to our Lord, that we will be faithful to him, that we are ready to make any sacrifice, we will also tell him: Jesus, with your grace; my Mother, with your help. I am so fragile. I make so many mistakes, so many small missteps, that I see I am capable – if you leave me – of making big ones!”[6]

[1] Preface II of the Passion of the Lord, used on Monday, Tuesday and Wednesday of Holy Week.