A standing room only crowd turned out on January 14, 2003, for a lecture by Rev. George Rutler entitled, “Reflections on the canonization of the Founder of Opus Dei.”

The event, which was sponsored by New York’s “Friends of Josemaría Escrivá Committee,” took place at Manhattan’s Union League Club, and was attended by more than 200 people.

Rev. Rutler’s wide-ranging reflections began with the new saint’s gift for friendship, laughter and happiness. He noted that St. Josemaría had experienced many trials in his life, from the difficulties of the Spanish Civil War era to misunderstandings about Opus Dei and the Second Vatican Council, and that throughout he had kept his good cheer and pleasant manner. 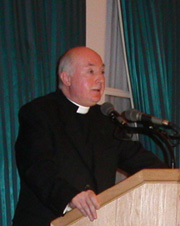 “There is no saint who is not a mortified saint,” remarked Fr. Rutler. “St. Josemaría described the experience of the Cross as the prayer of the senses and in his life showed that suffering is paradoxically an invitation to joy.”

Rev. Rutler, who is the pastor of Manhattan’s Our Savior Parish and the author of 14 books on theological and cultural topics, spent much of his lecture commenting on St. Josemaría’s teachings about the possibility of heroic sanctity for ordinary people. “Holiness is normal,” he emphasized. “It is only the corruption of sin that makes it seem odd. Holiness does not require great things, but ordinary things done with love.”

The address also included reflections on the relation of St. Josemaría to various other saints of the Church. Noting that St. Josemaría and St. Juan Diego were raised to the altar within months of each other last year, Fr. Rutler speculated that “they may have pulled each other up there.”

Fr. Rutler had the crowd laughing throughout the evening with his many anecdotes, including accounts of giving prayer cards of St. Josemaría to Mother Teresa; the comedian, Bob Hope; and the baseball star, Stan Musial.

On behalf of the organizers, Austin Ruse of the Catholic Family and Human Rights Institute, a United Nations NGO focusing on life and family matters, pronounced the evening a success and promised additional events in the years to come.