Reflections for Wednesday of Holy Week. The topics are: Judas was an apostle chosen by Jesus; divine mercy is greater than our weakness; a hope that leads us back to God. 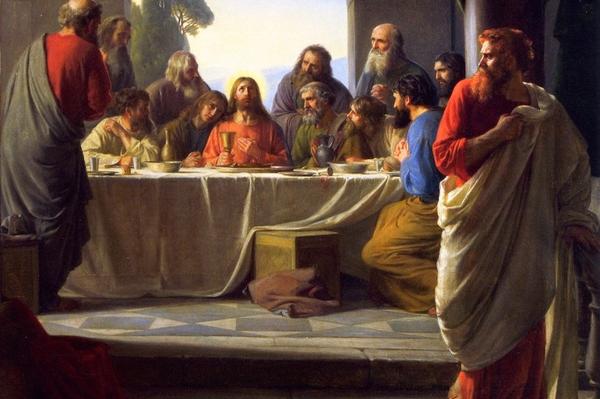 “ONE OF THE TWELVE, who was called Judas Iscariot, went to the chief priests and said, ‘What will you give me if I deliver him to you?’ And they paid him thirty pieces of silver. And from that moment he sought an opportunity to betray him” (Mt 26:14-16). Traditionally, on Wednesday in Holy Week, the Church remembers the betrayal of Judas. How distant in the heart of this apostle, who was now preparing to betray Jesus, are the first encounters with the one he had considered the Messiah! Judas Iscariot had also been personally chosen by Christ. Alongside Jesus, he could have been as happy as the others, and become one of the pillars of the Church. However, he chose to sell, at the price of a slave, the one who gave him everything. And it was God’s will that Holy Scripture should not silence this fact.

The tragic outcome takes place at the Last Supper, when Jesus is assailed by the anguish of the approaching Passion and the heartbreak of abandonment by those he loved. When they were at supper, he said, “Truly I say to you, one of you will betray me” (Mt 26:21). The other eleven apostles, with experience of their own failings and great trust in Christ’s words, exclaimed in surprise: “‘Is it I, Lord?’ He answered, ‘He who has dipped his hand in the dish with me, will betray me. The Son of man goes as it is written of him, but woe to that man by whom the Son of man is betrayed! It would have been better for that man if he had not been born.’ Judas, who betrayed him, said, ‘Is it I, Master?’ He said to him, ‘You have said so’” (Mt 26:22-25).

We do not know if Judas ever looked into Jesus’ eyes again. He would have discovered no rancor or anger there. Christ, his friend, was still looking at him with the same eagerness with which he had called him a few years earlier to be an apostle, to be alongside him. “What can we do before a God who served us even when he experienced betrayal and abandonment? We cannot betray what we were created for, not abandon what really matters. We are in the world to love him and others. The rest passes away, love remains.”[1]

JUDAS'S BETRAYAL was not the folly of an instant, but the result of many small infidelities. In the Gospel according to John we find a significant episode: the criticism of Mary of Bethany’s apparent waste in anointing Jesus with precious ointment, a few days before the Passover. Judas dares to criticize her behavior, with an apparently altruistic reason. But “this he said not that he cared for the poor, but because he was a thief and, as he had the money box, he used to take what was put into it” (Jn 12:6).

However, neither that offense, nor any human weakness, is strong enough to overcome the love of a God who calls each person constantly and who always awaits our return. Saint Josemaría saw in God’s way of being, so full of mercy, our true armor: “We all have shortcomings. But these defects of ours should never lead us to turn our back on God’s call, but to take refuge in it, to clothe ourselves in this divine goodness, as the warriors of old clothed themselves in their suit of armor.”[2]

Saint Augustine recommends humble petition before God as the best way to face our own fragility. Referring specifically to Judas Iscariot, he says: “After he betrayed Him, and repented of it, if he prayed through Christ, he would ask for pardon; if he asked for pardon, he would have hope; if he had hope, he would hope for mercy.”[3] Our Lord didn’t want Judas to perish, just as he does not want anyone to perish. Even in his own arrest he tries to bring him to his senses, calling him “friend” and accepting the disciple’s kiss. Perhaps even on the Cross Christ was hoping for his apostle to return and to be able to forgive him, as he did the repentant thief.

PETER, too, on that night of betrayal, denies our Lord three times. He who was to be the foundation of the Church wept for his sin with tears of love. Judas, in contrast, lacked the humility to return to his Lord to acknowledge his sin. Peter held firm to hope, while Judas lost hope, not trusting in God’s mercy.

Commenting on this Gospel passage, Saint Josemaría said: “Look how great the virtue of hope is! Judas recognized Christ’s sanctity, and repented of the crime he had committed. So much so that he took the money that was the price for his treason and threw it down in front of those who had given it to him as his reward for his betrayal. But he lacked hope, which is the virtue needed to return to God. If he had had hope, he still could have been a great apostle. In any case, we don’t know what took place in the heart of that man, whether he responded to God’s grace in the last moment. Only God knows what happened in his heart. So never lose hope, never despair, even though you have done the most foolish thing possible. All you have to do is speak out, repent, and let yourself be led by the hand, and everything will be put right.”[4]

This is something we can learn from today’s Gospel. No matter how great our offenses, God’s mercy is always greater. Everything can be healed if we turn to our Lord and open our heart to grace so that Christ can heal our wounds. “Fear and shame, which stop us from being sincere, are the greatest enemies of our perseverance. We are made of clay; but if we speak clearly, the clay acquires the strength of bronze.”[5] This is the strength that the humility of Saint Peter, the rock of the Church, attained. And it is the strength that we ask Jesus for through Mary, his mother, and also our mother.