The contemplation of Christ's face cannot stop at the image of the Crucified One. He is the Risen One! (John Paul II, "Rosarium Virginis Mariae", 23 and, "Novo Millennio Ineunte", 28)

From the Gospel of St. Luke:

But on the first day of the week at early dawn, they came to the tomb, taking the spices that they had prepared, and they found the stone rolled back from the tomb. But on entering, they did not find the body of the Lord Jesus. And it came to pass, while they were wondering what to make of this, that, behold, two men stood by them in dazzling raiment. And when the women were struck with fear and bowed their faces to the ground, they said to them, "Why do you seek the living one among the dead? He is not here, but has risen. Remember how he spoke to you while he was yet in Galilee, saying that the Son of Man must be betrayed into the hands of sinful men, and be crucified, and on the third day rise."

And they remembered his words. And having returned from the tomb, they reported all these things to the Eleven, and to all the rest. Now, it was Mary Magdalene and Joanna and Mary, the mother of James, and the other women who were with them, who were telling these things to the apostles. But this tale seemed to them to be nonsense, and they did not believe the women.

But Peter arose and ran to the tomb; and stooping down, he saw the linen cloths laid there; and he went away wondering to himself at what had come to pass.

And behold, two of them were going that very day to a village named Emmaus, which is sixty stadia from Jerusalem. And they were talking to each other about all the things that had happened. And it cam to pass, while they were conversing and arguing together, that Jesus himself also drew near and went along with them; but their eyes were held that they should not recognize him. And he said to them, "What words are these that you are exchanging as you walk and are sad?" 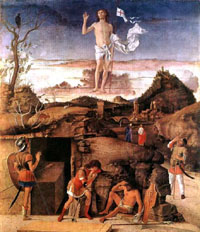 But one of them, named Cleophas, answered and said to him, "Art thou the only stranger in Jerusalem who does not know the things that have happened there in these days?" And he said to them, "What things?"

And they said to him, "Concerning Jesus of Nazareth, who was a prophet, mighty in work and word before God and all the people; and how our chief priests and rulers delivered him up to be sentenced to death, and crucified him. But we were hoping that it was he who should redeem Israel. Yes, and besides all this, today is the third day since these things came to pass. And moreover, certain women of our company, who were at the tomb before it was light, astounded us, and not finding his body, they came, saying that they had also seen a vision of angels, who said that he is alive. So some of our company went to the tomb, and found it even as the women had said, but him they did not see." (Luke 24:1-24) From St. Josemaría Escrivá:

When evening fell on the Sabbath, Mary Magdalen and Mary, the mother of James, and Salome bought spices that, going, they might anoint the dead body of Jesus. —Very early on the following day, when the sun has already risen, they come to the sepulchre (Mark 16:1-2). And upon entering they are dismayed, for they do not find the body of Our Lord. —A youth, clothed in white, says to them: Fear not. I know that you seek Jesus of Nazareth: non est hic, surrexit enim sicut dixit, —He is not here, for He has risen, as He said (Matt 28:5).

He has risen! —Jesus has risen. He is not in the sepulchre. —Life has overcome death.

He appeared to His most Holy Mother. —He appeared to Mary of Magdala, who is carried away with love. —And to Peter and the rest of the Apostles. —And to you and me, who are His disciples and more in love than Magdalen: the things we say to Him! 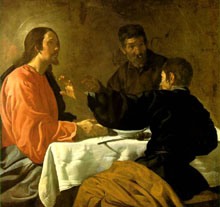 May we never die through sin; may our spiritual resurrection be eternal. —And before this decade is over, you have kissed the wounds on His feet..., and I, more daring —because I am more a child—, have placed my lips upon His open side.

(Holy Rosary, Resurrection of Our Lord)

Be filled with hope: Jesus Christ is always victorious. (The Forge, 660)

St. Paul gave a motto to the Christians at Ephesus: Instaurare omnia in Christo: to fill everything with the spirit of Jesus, placing Christ at the center of everything. "And I, when I am lifted up from the earth, will draw all things to myself." Through his incarnation, through his work at Nazareth and his preaching and miracles in the land of Judea and Galilee, through his death on the cross, and through his resurrection, Christ is the center of the universe, the firstborn and Lord of all creation.

Our task as Christians is to proclaim this kingship of Christ, announcing it through what we say and do. Our Lord wants men and women of his own in all walks of life. Some he calls away from society, asking them to give up involvement in the world, so that they remind the rest of us by their example that God exists. To others he entrusts the priestly ministry. But he wants the vast majority to stay right where they are, in all earthly occupations in which they work: the factory, the laboratory, the farm, the trades, the streets of the big cities and the trails of the mountains.

In this connection I like to think of Christ's conversation with the disciples going to Emmaus. As he is walking along, he meets two men who have nearly lost all hope. They are beginning to feel that life has no meaning for them. Christ understands their sorrow; he sees into their heart and communicates to them some of the life he carries within himself.

When they draw near the village, he makes as if he is going on, but the two disciples stop him and practically force him to stay with them. They recognize him later when he breaks the bread. The Lord, they exclaimed, has been with us! "And they said to each other: Was not our heart burning within us while he was speaking on the road and explaining to us the Scripture?" Every Christian should make Christ present among men. He ought to act in such a way that those who know him sense "the fragrance of Christ." Men should be able to recognize the Master in his disciples. (Christ is Passing By, 105)