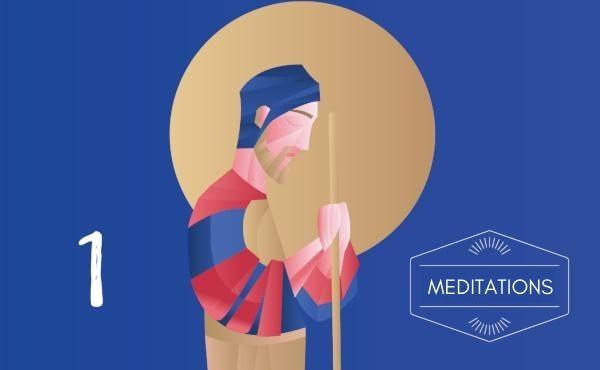 WHEN JESUS, during his public ministry in Galilee, came to preach in the synagogue in his hometown, all those present “were astonished” (Mt 13:54). His fellow townsmen were amazed at the words of someone they had seen grow up in their own squares and streets: “Is not this the carpenter’s son? Is not his mother called Mary? And are not his brethren James and Joseph and Simon and Judas? And are not all his sisters with us? Where then did this man get all this?” (Mt 13:55-56).

Sharing in this holy curiosity to know more about the family in which Jesus grew up, the tradition of the Church has identified in Sacred Scripture seven crucial moments in the life of Saint Joseph. In these seven incidents, as is normal in our life as well, both joy and sorrow are intermixed. Therefore the seven Sundays leading up to his feast day on March 19 are in many places dedicated to meditating on these Scripture passages. Saint Josemaria was once asked in a get-together for advice on how to draw closer to Jesus: “Think of that marvelous man, chosen by God to act as his father on earth; think of his sorrows and joys. Do you remember the seven Sundays? If not, I advise you to do so.”[1]

Devotion to the Holy Patriarch has been given clear expression in many works of art and in Church decrees and documents. In the 17th century, Pope Gregory XV instituted a liturgical feast in his name for the first time. Two centuries later, in 1870, Blessed Pius IX named Saint Joseph universal patron of the Church. Leo XIII, in turn, devoted an encyclical to the Holy Patriarch; and on the centennial of this document Saint John Paul II issued the apostolic exhortation Redemptoris custos. Now, in the third millennium, Pope Francis has also published a letter about Saint Joseph entitled Patris corde, “With a Father’s Heart.” This renewed interest within the Church, especially in recent times, can also renew our own gratitude and admiration, and lead us to ask ourselves: what place does Saint Joseph hold in my own heart?

“JOSEPH, SON OF DAVID, do not fear to take Mary as your wife, for that which is conceived in her is of the Holy Spirit; she will bear a son, and you shall call his name Jesus, for he will save his people from their sins” (Mt 1:20-21). With great simplicity, the angel clears away Joseph’s doubts and fears. We don’t know for certain what went through his mind and heart. Surely, he didn’t harbor doubts about his spouse’s innocence. But the angel’s words confirmed for him what perhaps he had already guessed: God is acting here. Through the angel, God himself reveals his plans to him and how He is relying on him to carry them out. Joseph is called to act as Jesus’ father; that is to be his vocation, his mission.

“What greatness the silent and hidden figure of Saint Joseph acquires,” Saint John XXIII said, “through the spirit with which he carried out the mission God had entrusted him. For the true dignity of a man is not measured by the glamor of outstanding results, but by the interior dispositions of good will and order.”[2] The Holy Patriarch, although well aware of the importance and nobility of the mission he had received from God, has come down to us as an example of humility and discretion. It is by acting with the silence of “hiding oneself and disappearing” that the divine plans render their greatest fruit.

Today as well, God continues to rely on Joseph to care for his family, for the Church and each of her daughters and sons, with the same dedication and tenderness as he did with our Lord. An old Jewish saying is that a true father is one who teaches the Torah, the law of God, to his son, because in doing so he truly gives life to him. Saint Joseph cared for the Son of God and, in his human nature, led Him to share in the hope of the people of Israel. And he does the same for us: with his powerful intercession he leads us to Jesus. Saint Josemaria, whose devotion to Saint Joseph grew continuously right up to the end of his life, said that “Saint Joseph really is a Father and Lord. He protects those who revere him and accompanies them on their journey through this life—just as he protected and accompanied Jesus when he was growing up.”[3]

“THE WHOLE CHURCH recognizes Saint Joseph as patron and guardian. For centuries,” Saint Josemaria points out, “many different features of his life have caught the attention of believers. He was a man ever faithful to the mission God gave him. That is why, for many years now, I have liked to address him affectionately as ‘our Father and Lord.’”[4] This title is both an honor and a responsibility. Together with Mary, Joseph fed, cared for and protected their family. And the Church, being the family of Jesus, also has Saint Joseph as patron and protector: “the Church, after the Blessed Virgin, his spouse, has always held him in great honor and showered him with praise, having recourse to him amid tribulations.”[5]

The Second Vatican Council speaks about “the duty of scrutinizing the signs of the times and of interpreting them in the light of the Gospel. Thus, in language intelligible to each generation, she can respond to the perennial questions which men ask about this present life and the life to come, and about the relationship of the one to the other.”[6] Therefore, as a family, we constantly ask ourselves what our Lord wants us to learn from each situation and crossroads. The intercession of the saints is a help from heaven to discover God in every event and to make his power present. Saint Joseph guides and watches over the Church on this path.

Saint Joseph is also patron of the family of the Work. In the early years, Saint Josemaria turned to him especially in order to be able to make Jesus in the Blessed Sacrament present in one of the first centers of Opus Dei. Through his intercession, in March 1935 it became possible to have our Lord reserved in the oratory of DYA Academy on Ferraz Street in Madrid. From then on, the founder of the Work wanted each tabernacle key in the centers of Opus Dei to have a small medal of Saint Joseph attached with the inscription Ite ad Ioseph. He wanted this to be a reminder that, just as Joseph in the Old Testament did for his people, the Holy Patriarch provided us with the most precious nourishment of all: the Holy Eucharist.

Let us ask Joseph to continue helping us draw close to Jesus in the Blessed Sacrament, which is the food with which the Church, and this “small portion” of it that is the Work, is nourished. That is what he did with Mary’s help in Nazareth, and that he will continue doing with her in our homes.