Text of the homily of Cardinal Giovanni Angelo Becciu at the beatification of Guadalupe Ortiz de Landázuri. 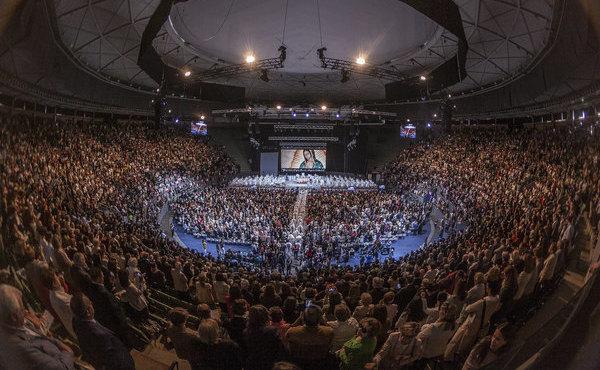 Listening to these words of Christ to his disciples proclaimed to us today, we have almost been overcome with fear. We want to respond to the Master right away saying, “The light of the world is you!” In fact, what comes to mind is what He told us about Himself: “I am the light of the world. Whoever follows me … will have the light of life” (Jn 8:12). Nevertheless, this passage in the Gospel also reminds us of what Christ told us, that we too are the light of the world, because we have received it from Him, who came into the world not only to “be the light” but to “give light,” to communicate it to the minds and hearts of those who believe in Him. This is exactly what Jesus wants from us, when he says, “You are the light of the world.” In fact, He adds: “A city set on a mountain cannot be hidden. Nor do they light a lamp and then put it under a bushel basket; it is set on a lamp stand, where it gives light to all in the house” (Mt 5:14-15).

We therefore have a task. We have a responsibility towards the gift received: responsibility for the light that has been transmitted to us. We cannot just consider it our own property and keep it for ourselves alone; rather, we are called to communicate it to others, to give it, and we should make it shine before men (Mt 5:16).

Blessed Guadalupe was aware of this truth. She is a model for us of how to manifest this light that is Christ and how to share it with our brothers and sisters. We find ourselves before a woman whose life has been enlightened simply by being faithful to the Gospel. Multi-faceted and insightful, she was a light for those who knew her, demonstrating courage and a joy in her life that came from abandonment in God, to whose will she sought to conform her life day after day, and whose discovery made her a brave witness and announcer of the Word of God. The source of her fruitful Christian life was her intimate and constant union with Christ.

Her dialogue with God, starting at a young age, was continuous and carried out simply through an intense sacramental life and extended moments of recollection: the Holy Mass and confession were the pillars of her spiritual life. The recitation of the rosary, prayed with great devotion, was a clear sign of a deep unity with the Mother of God, to whose intercession she would often entrust herself. Guadalupe followed a path of integral and mature prayer, which led her to experience God's presence and his merciful love in a deep and mystical way. Indeed, it was through contemplation of the Paschal Mystery that the light of truth that guided her steps shone forth. This same light turned her into a “lamp” placed on a lamp stand, where it gives light to all in the house (Mt 5:15).

The Cross did not take long in making its appearance in her life. In the terrible period of the civil war, she accepted with heroic fortitude – fruit of her faith, hope and charity, which were also heroic – the tragic shooting of her father, the dangers of armed conflict, the need to flee Madrid, poverty and the interruption of her studies. In the midst of such spiritual and material desertion, an encounter happened that would lead to the complete turning around of her life. Touched by a grace that she experienced during Sunday Mass, she felt the need to find someone who could help her find deeper answers to her spiritual aspirations; and thus, through a friend, she entered in contact with the founder of Opus Dei.

This encounter was a decisive step towards a loving and total dedication to God. Joining the Work, she was available, with enthusiastic and generous spirit, to communicate to everyone and everywhere the joy of discovering the precious pearl – the Gospel – and she began carrying out an intense apostolate, easily forming bonds of friendship with young people everywhere, bonds that were built with her faith, piety, charity and her healthy and contagious joy. She understood that union with God cannot be limited to a moment of prayer in a chapel, but that the whole day provided an opportunity to intensify her relationship with the Lord. In fact, one of her spiritual characteristics was transforming everything she did into prayer. In this regard, she liked to say that it was necessary to walk with “our feet on the ground, but always looking at Heaven, so that afterwards we can see more clearly what’s going on around us” (Informatio, Sec. II, Documented Biography, p. 46).

When the founder, Escrivá de Balaguer, asked her if she was willing to go to Mexico to begin the Work there, she immediately accepted with joy. She had no other interest than that of being a docile instrument in God’s hands. To overcome the understandable family difficulties, and to prepare herself spiritually to do whatever God asked, she entrusted her petitions to Our Lady of Guadalupe. In Mexico, her apostolic work was based on love for God, which was expressed in a life of piety and abandonment in his hands and in missionary zeal. Her big concern was forming very well those who had just joined the Work; and she insisted on the need for perseverance, edifying others with her spirit of prayer, temperance and penance. It was clear that she was working for the glory of God alone and for the extension of His Kingdom.

Destined to Rome with responsibilities of government, she was obedient, humble and cheerful as always, dedicating herself to office work and to prayer. Upon returning to Spain, she resumed her teaching and tasks of formation of young women in the Work: it was the moment for a determined, constant, generous and joyful commitment to live the Gospel ever more radically, a conscious response to God's love, in which she felt herself immersed, especially in the most tragic moments of her existence, with the resolution to be holy and, following the spirituality of Opus Dei, inspired by a strong desire to involve as many brothers and sisters as possible in the same adventure.

In every circumstance, Blessed Guadalupe has been a gift for others, especially in looking after the formation of students and in dedicating herself to scientific research to foster the progress of humanity. Her heart was always open to the needs of others, shown in a welcoming and understanding attitude. In all circumstances, she showed herself to be a strong woman. Her strength was particularly evident in the difficulties she faced, in the carrying out of new apostolic works and evangelizing places not yet reached, and above all in accepting patiently the physical sufferings that seriously conditioned her daily life. She was able to accept everything without conditions and without self-pity, transforming her illness into a precious offering to the Most High and an opportunity for deep union with the Crucified One.

To us Christians today, the new blessed tells us that it is possible to harmonize prayer and action, contemplation and work, according to a lifestyle that leads us to trust in God and to see our life as an expression of His will, which we are to live at all times. Her life also teaches us that the ability to listen and to always be cheerful even in the most painful situations is something beautiful and attractive. Guadalupe is presented before our eyes as a model of the Christian woman, always faithful to where God's plan wants her to be, especially in the social sphere and in scientific research. In short, Guadalupe was a gift for the whole Church and is a valuable example to follow.

Her wealth of faith, hope and charity is an admirable demonstration of what the Second Vatican Council has taught about the call of all the faithful to holiness, making clear that each person should pursue this goal “following his or her own path” (Lumen Gentium, 41). Today, this teaching of the Council finds fulfillment with the beatification of this woman, to whose prayer and intercession we have recourse so that we may always be better witnesses of the light of Christ and lamps that illuminate the darkness of our time.

Yes, let us invoke her: Blessed Guadalupe, pray for us!