Homily of Monsignor Fernando Ocáriz at the Mass of Thanksgiving for the Beatification of Guadalupe Ortiz de Landázuri, (Madrid, 19 May 2019. Fifth Sunday of Easter) 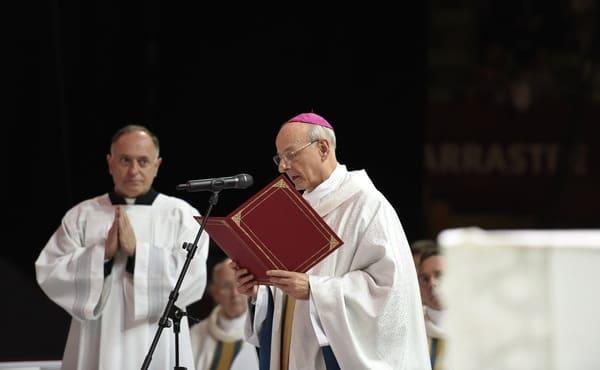 The liturgical season now is marked by joy at Christ's resurrection. We still remember the experience of that young disciple who, standing before Jesus’ empty tomb, “saw and believed” (Jn 20:8). This is the most decisive moment in history: God who becomes man overcomes sin and death. It is an event that changes everything for the lives of each one of us. And today, with this Easter joy, we give thanks to God for the beatification of Guadalupe Ortiz de Landázuri, proclaimed as a model of holiness by Pope Francis.

In the Psalm from today’s Mass, we raised a song of joy: “All your works give you thanks, Lord ... They speak of the glory of your reign and tell of your mighty works” (Ps 145:10-11). The mighty works that God has performed throughout history are beyond number, above all the redemptive Incarnation of the Son of God in Christ Jesus, who has fully revealed to us that “God is love” (1 Jn 4:8).

God’s works have not ended. His power continues to shine forth throughout history. Saint Josemaria liked to remind us, using words from the prophet Isaiah: Non est abbreviata manus Domini (Is 59:1): “‘The arm of the Lord has not been shortened.’ God is no less powerful today than he was in other times” (Christ is Passing By, 130). The same Lord wants to keep showing Himself to us in different ways, including through the saints. Each saint is a work of God, a way of making Himself present in our world, and “the most attractive face of the Church” (Francis, Gaudete et exsultate, 9).

Guadalupe Ortiz de Landázuri is the first layperson of Opus Dei to be set forth as a model of holiness by the Church. This was already the case with the founder, Saint Josemaria, and his first successor, Blessed Alvaro. Thus we are especially reminded of the call that God makes to all of us to be holy, as Saint Josemaria preached since 1928 and which was one of the main teachings of the Second Vatican Council (see Lumen Gentium, ch. 5). The new blessed sought to bring this conviction to the people around her, insisting that, with divine grace, union with God is within everyone’s reach in the circumstances of ordinary life.

When she was thirty-seven years old, Guadalupe wrote in a letter to the founder of Opus Dei from Mexico: “I want to be faithful, I want to be useful, and I want to be holy. But the reality is that I still have a long way to go ... But I’m not discouraged, and with God’s help and your support and everyone’s, I hope I’ll win through in the end” (Letter, 1 February 1954). This brief phrase – “I want to be holy” – is the challenge that Guadalupe accepted for her life and that filled her with happiness. To achieve it, she did not have to do extraordinary things. In the eyes of the people around her, she was an ordinary person: worried about her family, going from place to place, finishing one task and starting another, trying to correct her defects little by little. Right there, in those struggles that seem small, God performs great works. And He wants to do likewise in the life of each and every one of us.

The readings from today’s Mass also lead us to consider some of the dispositions that a Christian should possess. In the first reading, we see Paul and Barnabas visiting some of the early Christian communities. The two of them had only recently started to make Christ known among all kinds of people. Their listeners reacted with surprise at their testimony: some were excited, even believing them to be gods (Acts 14:11), while others rejected them violently. In this particular instance, Paul had just been stoned in Lystra by a crowd urged on by people from Iconium and Antioch. After beating Paul, they dragged him out of the city and abandoned him there, thinking he was dead (Acts 14:19). But today's reading surprises us by telling us: “[Paul and Barnabas] returned to Lystra and to Iconium and to Antioch. They strengthened the spirits of the disciples and exhorted them to persevere in the faith” (Acts 14:21-22). They were not satisfied with keeping for themselves the joy of having received Christ in their lives. They needed to tell the whole world that a deeper peace existed and that they had found it, at last, with Jesus. They saw this mission as the most important reality in their life, more than their material well-being, their comfort or their social situation. And this spurs them to return to the city, despite the opposition that their message would surely face there. They return to console the people, to pray and to offer sacrifice (Acts 14:22-23). They do not go to repay evil with evil, but – as Saint Josemaria liked to say – to “drown evil in an abundance of good” (Furrow, 864).

Blessed Guadalupe also discovered the importance and joy of bringing the consolation of Christ’s friendship to others, inspired by her encounter with Saint Josemaria and Opus Dei. From that point on, her story (similar to our own in many ways) began to be seen more clearly as a work of God. She had to make many trips as well: Madrid, Bilbao, Mexico, Culiacan, Monterrey, Tacambaro, Rome... She faced tasks that were labour-intensive, a heart disease that weakened her, and a multitude of daily difficulties. But she understood that the best thing she could do was the same as Saint Paul: to reach identification with Christ, and with Him and in Him, to comfort the people she encountered along her way with the joy of the Gospel, being available for others. One day, thinking about all the tasks lying ahead of her, she wrote to Saint Josemaria, “Knowing me as you do, you can see that it’s all much too much for me, can’t you? But I don’t get discouraged or scared; I only ask for your prayers that I may never fail to do what God wants in anything, big or small” (Letter, 15 March 1951).

We too will face difficulties along our path: moments of fatigue, physical pain, misunderstandings... In these moments, we can remember the attitude of the saints, seeking in our relationship with Jesus the way to encourage, console and do good to those around us. In the second reading, we hear these words of the Lord: “Behold, I make all things new” (Rev 21:5). It is by leaning on Him that we can, despite our inadequacy and weakness, be the “consolation of God” for others.

In the Gospel of the Mass, we find the “new commandment”: “Love one another as I have loved you.” Jesus says this will be how Christians will be identified down through the centuries: by being bearers of His love, a selfless love towards all men and women as children of the same Father. This is the main mark of the saints. God enabled the new Blessed Guadalupe Ortiz de Landázuri to build bridges and offer friendship to all kinds of people, including those far from the faith, from different countries and all ages.

Within a few minutes, the words that Jesus spoke at the Last Supper will be repeated. He will then be present in his Body, Blood, Soul and Divinity. Let us prepare ourselves to receive Him and thus be able to open ourselves more fully to the works that God wants to accomplish through each of us. We need to let the Lord transform us through the Eucharist and continue to write the true history of our world. Let us also ask our Mother, Regina Coeli, Queen of Heaven, for help, so we never lack the desire for holiness that moved Guadalupe to want to carry Christ's love and consolation to the whole world. Amen.